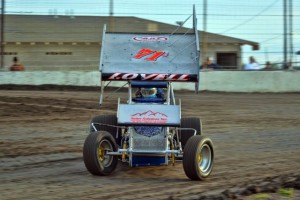 Marysville CA –An open wheel extravaganza will be offered at Paul and Kathy Hawes’ Marysville Raceway Park Saturday. The return of the mighty MRP Winged Sprint Cars and breathtaking antics of the MRP Wingless Warriors will headline the show. The Pro 4 Sprinters will also be at MRP. Stock car fans will get to see another MRP Hobby Stock tussle as well.

3-time champion Brent Dothage from Kelseyville, Woodland’s Peter Paulson, and Oroville’s Heath Hall will all be vying for a spot in victory lane. Rookie of the Year challengers in the MRP Winged Sprint Car division, lady racer Raquel Jennings and Branden Mansfield, will be back to continue their season long battle for that trophy.

800 horsepower, 1525 pound winged rockets are ready to scream this Saturday night at MRP!

Legal Shield’s Rod Engberson will once again post an additional $100 for the fastest qualifier in the “Legal Shield Quick Time Shootout”. The “Shootout” will open the program. MRP is northern California’s only Contingency Connection dirt track posting some $1100 in additional contingency awards for the winner in the MRP Winged Sprint Car division. This, in addition to the $1000 in cash from the purse awarded the feature event winner.

The up front title battle for the MRP Wingless Sprint Car crown is an exciting one. Anderson’s Rowdy McClenon has a 16 point edge on local sprint car star Jeremy Hawes. Hawes won the last time the Wingless Warriors hooked up at MRP, but McClenon was hot on his heels. But, when McClenon has won this season, it has been Hawes that has kept the heat on McClenon. So, the mid-season clash continues for the two able warriors. Opening night feature event winner Tim Sherman Jr. of Sacramento remains in 3rd place in the standings.

Perhaps some of the most thrilling racing moments presented at MRP is performed by the wingless sprinters. With no aerodynamic aids, the driver is a more pivotal part of the equation. It’s a tail wagging, 100 mph, thrill a minute ride!

Speaking of Misty Castleberry, she has simply owned victory lane this season in the companion Pro 4 Sprint Car class that will also run at MRP on Saturday. Defending champion Tim Maclaughlin of Colusa tipped his hat to her efforts last time the Pro 4s were in town, “She’s doing the job and right now we’re all running for 2nd.” Maclaughlin will be in the field Saturday to try to turn the tables on Castleberry.

The MRP Hobby Stocks will give the fendered fans something to cheer about. Defending champ Jeremy Hammons of Yuba City has got to find a way to beat Eddie Hammett as the two racers continue their battle to get to victory lane. Hammett has owned it since his return, though Hammons remains solidly in control in the MRP Hobby stock points. Richard Sinnott is still in 2nd place in the points, but Hammett is closing fast with his string of victories.

The pit gate opens at 3PM. Grandstands open at 5PM. Hot Laps are at 5:30 with qualifying scheduled for 6:15. Racing begins after qualifying.

The text is based on information we have at the time of its release.