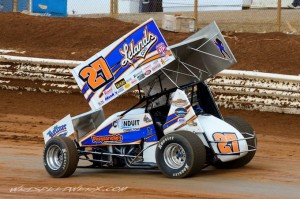 In the ARDC Midget feature, Kyle Lick took advantage of a late race restart in the 20-lapper to pull out a win after running behind the entire distance to that point.

Logan Schuchart and point leader Blane Heimbach started on the front row of the 25-lap Labor Day Classic for sprints with Dewease lining up sixth for the start.

And on the second lap, Dewease, already a three-time winner of the prestigious event, made some daring moves to get himself into contention on the tricky daytime surface.

After blasting into third as the field ran down the frontchute to complete lap one with Schuchart leading the way, Dewease pushed Heffner’s No. 27 to the extreme top going into turn one as the Schuchart and Heimbach raced lower on the oval.

Dewease used the run he got around the thinning cushion near the outside rail to slingshot to Heimbach’s outside as the pair raced onto the backchute and then he swerved across the track with a thread-the-needle move to draw under Schuchart going into the first corner.

The move worked for Dewease as he crossed the stripe as the leader of the second circuit with Schuchart hot on his heels as the race quickly came upon the backmarkers with just six laps recorded.

Dewease had his hands full with traffic and had Schuchart nose-to-tail on the frontstretch when the races first caution flag unfurled with nine laps down.

The restart saw Dewease refuse to give up his outside line despite a smooth running, low groove Schuchart and the Hanover upstart was competing to the leader’s inside when another yellow came out just one lap later when Chad Layton drifted to a stop on the frontchute.

Layton’s misfortune only served to expand his deficit in points behind Heimbach in the season-long race but it also gave Schuchart another restart shot at leader Dewease.

And again Dewease stayed up top for the restart and did so at high risk as his outside line kept allowing Schuchart to contest the spot.

The pair was again nose-to-tail with 10 laps to go as they ran in front of the grandstand and after Dewease was virtually able to look directly to his left into Schuchart’s eyes as he came off of the second turn, he changed his game plan and going into the third corner he slammed the door down low and began hugging the inside rail around the track.

His move served to preserve his lead and eventually the win worth $4,000.

Before the race as he pulled the sixth spot to start the feature, he said he was going to set the car up to run where everyone else wasn’t.

And after the race, car owner Mike Heffner complemented Dewease on his tenacity during a trying season to date, calling him, “the smartest racer I know,” while calling him “wily” for making the car perform where it did in order to pick up the win.

Heimbach was fourth and Dylan Cisney was fifth.

Heats for the 22-car field went to Dietrich, Heimbach and Marks.

Lick led the first lap of the ARDC Midget main before sixth starter Ryan Greth took over and pulled away to a massive lead over the field.

With three laps to go Greth had built up a lead of more than a straightaway over Lick but a caution flag forced a restart, bunching the field.

And when Greth drove into the first and second turn upon the return to green, his car pushed up the racetrack and Lick took advantage to drive into the lead.

Shuffling continued during the final three circuits with Bruce Buckwalter Jr. moving into second while 11th starter Billy Pauch Jr. surged for third at the finish.

Steve Drevicki ended fourth with Greth falling back to fifth.

Heats for the 27-car field went to Brett Arndt, Drevicki and Pauch.