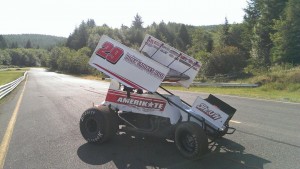 Climbing in the seat of his own Willie Croft Racing,/Twenty Nine machine on Saturday night, Willie Croft continued his strong 2013 campaign as he tallied a fifth place finish at the Reno Tahoe Fernley Raceway in Fernley, NV.

“It was an interesting track, and to move forward a couple spots is great for us, as we’ve only ran this car a handful of times this year,” Croft said. “I have to thank the guys who gave up their weekends and came up and gave me a hand, it really is appreciated.”

Scoring a fifth place finish in his heat, Croft was able to qualify for the Dash based on time, but he pulled yet another eight pill in the Dash, putting him in the fourth row, on a very tricky track.

Finishing in the eighth spot, Croft lined up for the feature event in the fourth row, and passing proved to be very tough.

During the 30-lap feature event, Croft was able to made a little headway, as he worked up into the fifth spot, and began to hound Bobby McMahan.

Working on McMahan late in the feature event, Croft was able to poke his nose under him a few times, but was unable to make a move for the fourth spot, and settled for fifth at the stripe.

“The feature was tough, and it was really hard to find grip, but like I said earlier, I was very pleased to be able to move forward,” he added. “If I can draw better in the Dash, I think we will be okay to close this season out.”

Willie Croft Racing would like to thank Holey Smokes BBQ, The Christian Stover

ON TAP: Croft will be back in action this Saturday night at the Thunderbowl Raceway in Tulare, CA.