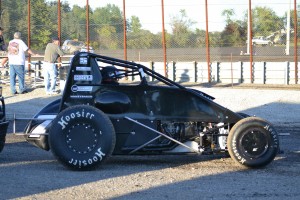 Gas City, IN — (September 27, 2013) — Gas City I-69 Speedway capped another racing season with the Jack Hiemlick Fall Finals in fine fashion as Bryan Clauson came from 10th starting position and passed Kevin Thomas Jr. on the last lap of the 25 lap feature.

Kyle Robbins and Adam Byrkett made up the front row but 3rd place starting Gary Taylor led the first lap. Robbins was holding on to 3rd in the early going with Chad Boespflug piloting the 17B tonight, now up to second. Behind this threesome, with Taylor still leading, a pack of cars were closing fast and by lap ten Kevin Thomas had caught Taylor along with Jerry Coons Jr. and Boespflug still in the fray. Now a four car battle for the lead was using all of the race track in an exciting battle. Meanwhile the 7 of Bryan Clauson was on the prowl and up to 4th.

Lap 15 saw Thomas make the pass for the top spot with Taylor and now Clauson and Coons in tow at 20 laps. Clauson then closed on Thomas and on the final circuit he pulled even in turn one and eventually made the pass stick in turn three for the win.