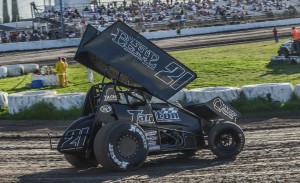 Kicking his action packed 2014 season off at the Marysville Raceway Park on Saturday night with the Civil War Series presented by Flowmaster, Easton, CA driver, Tommy Tarlton’s night came to an end on the 10th lap when he was collected in a wreck.

“We had a pretty good car in qualifying and in the B, and felt good in the A, but unfortunately everyone got bottled up on a restart, and we were right in the middle of it,” Tarlton said.

Tarlton’s night got off to a quick start as he timed his Elite Landscape Construction/Tarlton and Son, Inc./Tachi Palace Hotel and Casino entry in fourth fastest with 33-cars checked in.

Heat race action saw Tarlton slip to the fifth spot, and not transfer to the feature event, forcing him to run the B-Main for a final shot at the feature, where he started on the pole.

After an opening lap red, Tarlton got the jump in the B, and checked out from the field, as he won the race going away, and transferred to the feature event, where he lined up in the ninth spot.

As the race got underway, Tarlton felt out the tricky surface as he moved into the eighth spot after,a pair of early cautions slowed the race.

A lap 10-restart would unfortunately doom Tarlton, as a wreck in front of him left him with nowhere to go, and he would ultimately get a piece of the action that resulted in his night being over.

“We had some heat race issues that hurt us, as we would have been in the Dash if we transferred through the heat, but the guys worked hard, and we just had some more bad luck in the feature,” Tarlton explained. “It is going to be a long year, so we will forget about this quickly, and move on.”

Tarlton Racing would like to thank Elite Landscape Construction, Tarlton and Son, Inc., Tachi Palace Hotel and Casino, Pabco Gypsum, Bandy and Associates, All Star Performance, Corporate America Investments, and BG Lubricants for their support through the 2014 season.

ON TAP: Tarlton will return to action on March 29th at the Antioch Speedway with the Civil War Series Presented By Flowmaster.