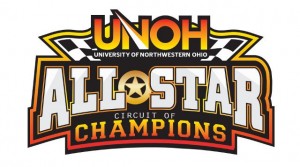 Attica, OH — (March 27, 2014) — It has become one of the most anticipated events in sprint car racing – the Spring Nationals at Attica Raceway Park.

The University of Northwestern Ohio All Star Circuit of Champions will kick off the Ohio Region point battle at “Ohio’s Finest Racing” venue on Friday and Saturday, April 4 and 5 with the HD Supply/Construction Equipment and Supply Spring Nationals. The event has been held at Attica since 1992. This year’s Spring Nationals will mark the 102nd and 103rd visit to Attica by the UNOH All Stars.

Last year’s Spring Nationals saw the opening night lost to rain but the finale found Dale Blaney in victory lane. Blaney’s 13 All Star wins at Attica are the most by any driver since the first All Star show was held at Ohio’s Finest Racing speedplant in 1989. The winners of UNOH All Star events at Attica in 2013 were Blaney, Chris Andrews (Ohio Sprint Speedweek) and a sweep of the season-ending August events by Tim Shaffer.

Blaney will have his hands full in trying to defend his title in 2014. Besides four time champion Tim Shaffer, who currently sits second in All Star National and Eastern Region points, former four time champion Chad Kemenah is gunning for his fifth title and sits third in the 2014 points.

Danny Holtgraver, who had a break-out year in 2013 with the All Stars, is riding in the fourth place in points followed by Greg Hodnett, Dale Blaney, Jac Haudenschild, Danny Dietrich, Dave Blaney and Caleb Helms.

Throw in two-time All Star champion Greg Wilson, who has 19 career Attica wins, Stevie Smith, who is expected behind the wheel of the Aaron Call/Janet Holbrook #83 machine – Smith has 4 career Attica wins – and the possibility of some of the Pennsylvania Posse teams making the trek to Attica and it could be another exciting weekend.

The Summit Racing Equipment UMP Late Models and Foster Auto Body 305 Sprints will also be in action both nights of the Attica Spring Nationals.