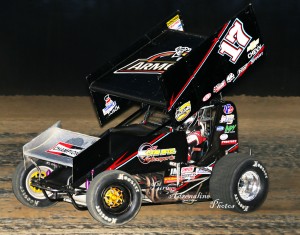 April 30, 2014 – Joey Moughan would give his racing season to date a B if he was grading it.  A closer look may earn a higher mark as he sits second in Midwest Open Wheel Association points heading into this weekend’s doubleheader in Illinois at Lincoln and Flora.  The Springfield, Illinois driver is also anticipating next Wednesday’s showdown at his home track, Jacksonville Speedway.

So far, he has split time in the Joey Moughan Racing #17M, the Northrop Racing #83 and the Wilson Brothers 360.  “We’ve had a pretty good start to the season really,” says Joey.  “It’s the first time we’ve really run for points with the MOWA series and I’m just thankful for all the help I have.  In addition to my sponsors, the Wilson Brothers down in Tennessee make it possible to run the 360 shows.  We’ve had a couple of motor issues that are getting corrected.  Jeff Claxton has done a great job with my motors too, and of course, I have to thank Northrop Racing for letting me run the #83.”

Joey’s MOWA season started in early April at Jacksonville Speedway in the Northrop #83.  “We had some motor issues in the heat at Jacksonville,” he says.  “We were able to get that fixed.  We started tenth in the feature and ended up driving to third.  We actually were able to get up to second, but we lost the brakes.  Obviously, I wasn’t able to try the stuff I wanted to on the track, but it was a solid start.”

The series moved to the 34 Raceway in West Burlington.  Typically, Joey fares well at the 3/8-mile oval, but he struggled to a 14th place finish.  “We were back in my car at Burlington,” he says.  “I’ve been trying some things with that car.  I unloaded with a mediocre car, and I proceeded to make it worse as the night went on.  We were horrible come feature time, but we were able to salvage some points, I guess.  Some things work, and some don’t.  You’re never going to know until you try it, and that’s the good thing about running my own car at some of these races.”

Joey bounced back with a fierce charge at Tri-City Speedway on April 18.  “We had a good car at Granite City,” he says.  “Track conditions weren’t the best in the heat for passing, so we just got by one car.  That put us behind the 8-ball in the feature (starting 17th), but I was able to take some of the stuff I learned at Burlington and go the opposite way with it.  We were able to get up to fourth.  We had a great car all the way through.”

Heading into this weekend’s events at Lincoln Speedway and Clay County Speedway in Flora, Joey is second in the MOWA points’ race, trailing Jerrod Hull by just fifteen points.  “With all the things we’ve tried, we’re sitting well,” he says.  “It’s a good time of year to be trying some things, and we are learning.  I’ve been working with Dan at Maxim, and he’s helped me a bunch as far as what I’ve been trying and what I’ve done wrong.  When you’re driving for someone else, it’s hard to get off the beaten path and try things.  If you have a bad finish, you may be fired.  I’ve learned to harness that.  Driving for myself, no one’s going to fire me when I make a setup mistake.  I’m learning a lot, and there’s a few more things I’ll be trying.”

He will be back in the #83 this weekend.  “We’ll be running Northrop’s car both nights,” says Joey.  “We actually hurt a valve the first night at Jacksonville, so they’ve been out for a little bit.  Everything’s fixed, so it should be good.  I’d like to get them in Victory Lane this weekend.”

Joey is stoked for the first visit ever for the World of Outlaws next Wednesday.  “I’ll be running my car at Jacksonville,” he says.  “It will be my short track car from last year.  I actually haven’t run it yet this year, but I’m excited.  I can’t believe it’s going to happen!  I’m really excited about it.  Twenty-four cars on that track is going to be crazy!  It ought to be something.  Our goal at Pevely (with the WoO) last weekend was to be in the top ten, and we had a shot.  The car was really good, but we had a power steering hose leak.  I ran out of tear-offs before I ran out of power steering.  Coming to our place, I’m looking for a top ten or top five.”