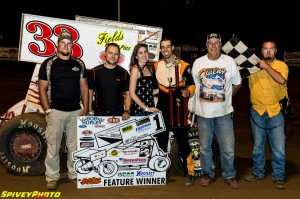 On lap number six, Owens was working to get around lapped traffic coming out of turn four and made contact on the front stretch with Dan Schnackenberg who then careened to the right and hit Perry Pickard who was working back towards the center of the track after getting high in turn four. The result of the fracas was Pickard stopping on the racing surface to bring out a yellow flag. Pickard would retire pitside.

On the restart, Kyle Cobb, who earlier in the evening was the Bob Hurley Auto Family heat race winner, came into contact with other cars and found himself sitting dead on the track facing the opposite direction in front of the flagstand necessitating a yellow. Cobb, along with Sheldon Barksdale and Fred Mattox, who had their own woes, would each retire to the pits.

Owens would restart the field followed by the cars of: Cottrell, Shane Sellers, AmeriFlex Hose & Accessories heat winner Andrew Deal and Kyle Clark. Owens would quickly open up a six-car length lead within a couple of laps while the others would battle for position. Chance Morton would get by Clark for fifth and Sellers would overtake Cottrell going into turn one on the tenth lap.

By the halfway point, Owens’ lead on Sellers would begin to shrink as Sellers’ car was working better as the laps wore on. What was a 6-8 car length lead at times for Owens became 3 lengths. At the same time, it was a full straightway back to Deal for third. As the lead duo took the ‘five to go’ signal from flagman JD Etter, they encountered lapped traffic and Deal cut the large straightway gap to Sellers’ bumper to 3-4 car lengths. However, as quick as Deal made progress, he lost valuable ground when he was hung up behind a lapped car moments latter.

Owens, who earlier in the night also captured the Drive Shaft Inc. heat race, would cross the line as the victor followed by Sellers in the Checkered Flag Trucking / Brand Racing Engines / Maxim for second. Deal collected third in his Cagle Motorsports / Wornhor Racing Engines / ART chassis. Morton and Cottrell rounded out the top five. Completing top ten runs were: Koby Barksdale, Kade Morton, Danny Smith, Mickey Walker and Shayla Waddell.
Smith would receive the AmeriFlex Hose & Accessories Hard Charger after starting 19th. Mike Huard was the D&E Supply Hard Luck recipient after a scary looking flip in his heat race where his car was higher than the catch fence after riding up and over another car. Huard was shaken but otherwise OK.

The next stop on the OCRS circuit is next Saturday night at the Salina Highbanks Speedway in Salina Oklahoma. 2013 winners at the Highbanks were: Harli White, Casey Wills and Andrew Deal. 2012 winners were: Shayla Waddell, Jamie Passmore and Jeremy Allen. 2011 winners were: Whit Gastineau and Sean McClelland. Therefore you have no repeat winners in these eight visits. OCRS looks to see everyone there next Saturday night!