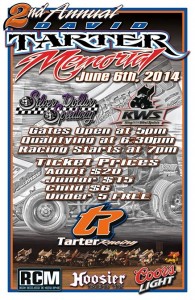 Aptos, CA — (June 3, 2014) — After a couple weeks off the King of the West 410 Sprint Car Series is eager to hit the track for a double-header weekend of competition, beginning this Friday night June 6 at the Silver Dollar Speedway in Chico, prior to visiting the Marysville Raceway Park on Saturday for the first time in two-years.

The event on Friday marks the second annual “David Tarter Memorial,” which pays tribute to former Sprint Car racer David Tarter, who we lost in a pit area accident during a King of the West race at Silver Dollar Speedway in June of 2012. Last year’s inaugural running was held as a track point event, but this season is sanctioned by the King of the West 410 Sprint Car Series. KWS driver Sean Becker captured last year’s race and looks to make it back-to-back on Friday.

In honor of David Tarter’s No. 35 the evening on Friday will be capped with a 35-lap main event.

The Saturday showcase will be the first King of the West 410 Sprint Car Series event at the Marysville Raceway Park since April of 2012. That night saw Chico’s Jonathan Allard win a thriller over Tim Kaeding and Bobby McMahan. The Saturday event will also be just the fourth Winged 410 Sprint Car event at the MRP bullring since 1999. Series winners at the track in that time include Elk Grove’s Kyle Larson, Sacramento’s Willie Croft and the previously mentioned Jonathan Allard.

Leading the King of the West 410 Sprint Car Series into the weekend is defending champion Kyle Hirst, who has been a model of consistency once again this season. The 26-year-old is fresh off his first KWS win of the season during the most recent series event in Tulare on May 17 and hasn’t finished outside the top-five yet this year. The wheel-man of the Roth Motorsports No. 83jr came close to winning the David Tarter Memorial last season and will be trying hard to check it off his list on Friday.

Thirteen-time Golden State/ King of the West 410 champion Brent Kaeding has had a strong start to the season and ranks second in the series standings after five rounds of competition. The National Sprint Car Hall of Famer has scored a season best KWS finish of second and is coming off a seventh place effort in Tulare on May 17. In his career Kaeding has won the most main events of any driver at the Silver Dollar Speedway and will be gunning to add another on Friday night at the Tarter.

Three-time USAC National Silver Crown titlist Bud Kaeding has shown some serious speed during this early season, but has been battling through some tough luck in recent weeks. The Campbell, CA driver sits third in the King of the West 410 Sprint Car Series standings, as he continues his first season behind the wheel of the famed Williams Motorsports No. 0 machine. Kaeding will be searching for victory this week and is one of the favorites at both Chico & Marysville on Friday & Saturday.

One of the more impressive drivers through the first five events this season has certainly been Sacramento’s Willie Croft, who goes into the weekend maintaining the fourth spot in the King of the West 410 standings. “Double Down” has looked as good as ever this year and if it weren’t for a few instances of bad luck, he could very well be locked in a title fight with his brother-in-law Kyle Hirst. In the most recent series event, Croft looked to be on way to victory, until running out of fuel late in the race.

Rounding out the top-five in the King of the West 410 Sprint Car Series points going into Friday happens to be the three-time & defending Silver Dollar Speedway track champ Sean Becker of Roseville. The “Shark” is currently in the midst of his first full-time KWS campaign since 2007 and should be considered a heavy favorite at two of his best tracks this weekend. Becker also routinely runs strong at the Marysville Raceway Park and is in search of KWS season win number one this week.

Fremont’s Shane Golobic is coming off his best King of the West finish of the season in Tulare on May 17 and sits sixth coming into Friday. The Fremont, CA driver has finished no worse than second in the last five Prentice Motorsports Group events and if there were power rankings for Northern California, he would certainly have to be considered at the top. Former Silver Dollar Speedway track champion Bobby McMahan ranks seventh in the KWS points. The Elk Grove, CA veteran came close to a win at the Marysville Raceway Park with KWS in 2012, eventually finishing third in the feature.

Fresno’s Craig Stidham put together his best run of the season during the recent KWS event in Tulare on May 17, earning the KSE Hard Charger Award in the feature by coming from 15th to fourth. The former Trophy Cup champ sits eighth going into Friday night. Completing the top-10 in the King of the West 410 Sprint Car Series standings going into the double-header weekend are Fresno’s Dominic Scelzi in ninth, along with 2004 series champ Jason Statler & three-time series titlist Jonathan Allard, who sit tied for the 10th spot.

The Silver Dollar Speedway front gate will open at 5pm this Friday June 6, with adult tickets costing $20, juniors 12-15 will be $15 and kids 6-11 are $5. All seating is general admission during the night. The first heat race will be scheduled to go off around 7pm.

The Silver Dollar Speedway is located on the Silver Dollar Fairgrounds, a half-mile west of SR 99 on Park Ave in Chico, California. For directions and a map visit http://www.silverdollarspeedway.com/location.php

The front gate at Marysville Raceway Park on Saturday June 7 will open at 5pm, with adult tickets costing $18, juniors $15, seniors/ disabled/ active military $10, kids 6-12 $5 and a family pass with two adults & 3 children age 12 or under is $40. Age five & under is free. All seating is general admission during the night. The first heat race will be scheduled to go off around 7pm.

The Marysville Raceway Park is located in Marysville, California. From the Junction of HWY 70 and HWY 20 (12th Street), go a quarter-mile east on HWY 20. Turn south onto Ramirez Road for 1.5 miles. The physical address is 1468 Simpson Ln, Marysville, CA 95901. Directions & hotels can be found at http://marysvilleracewaypark.com/maps.html

Info on the King of the West 410 Sprint Car Series can be found at http://www.kwssprints.com/