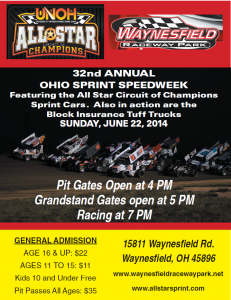 Waynesfield sits directly in the crossfire hosting the third race of the nine race week. Current track record holder Cap Henry confirmed via Twitter yesterday that he intends to run at the “Field” to uphold his track record. Brad Sweet, who picked up the victory last year, is rumored to make an appearance as well. Brad tied Cap’s track record last year in qualifying and is looking to beat it this round. Veteran driver Dale Blaney currently leads the All Star point standings with Tim Shaffer and Ohio driver Jac Haudenschild trailing closely behind. Danny Holtgraver in the 10H and Chad Kemenah in the 63 round out the top five in points. Waynesfield’s very own Block Insurance Tough Trucks are also on the card for Sunday’s must see event of the year. Pit side gates swing open at 4PM. Grandstand gates open at 5PM. Cars hit the racing surface for racing just after 7PM. Adult general admission is just $22, kids 11-15 are $11, and all kids under the age of 10 are FREE. Pit admission is $35. See the event flyer below for further details. Additional information on this special Sunday evening of racing is also available online at www.waynesfieldracewaypark.net or www.allstarsprint.com. Join the conversation on all the latest Waynesfield Raceway Park headlines on Facebook and Twitter.