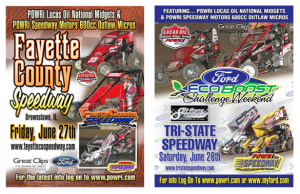 Millstadt, IL — (June 23, 2014) — After excessive rainfall postponed the May 16th event, POWRi is rescheduled to run at Fayette County Speedway in Brownstown, IL on Friday, June 27th. The midgets and micros were unable to race at the ¼ mile dirt high-banked oval during the 2013 season due to scheduling conflicts. However, past feature winners at Fayette County Speedway include Brett Anderson in 2012 and Michael Pickens in 2011.

MAVTV American Reel is set to broadcast the June 28th Ford EcoBoost Challenge finale at Tri-State Speedway. The broadcast will not be live, but will be shown at a later date. Fans will be able to witness the action from home on channel 248 on Dish Network or on channel 214 on DirecTV. MAVTV is also available on other providers. Go to www.MAVTV.com and click on “GET MAVTV” to find out if MAVTV is available to you.