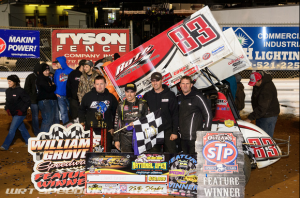 David Gravel and his Roth Motorsports team bested a star studded field of drivers at the Williams Grove Speedway on Saturday night as Gravel picked up his first career National Open.

“It is surreal to win this thing, but I hate to win like that,” Gravel said who made contact with Stevie Smith late in the race while battling for the lead. “It was not intentional, and I feel horrible for how it played out.”

With 55 cars checked in for the prestigious event, Gravel showed speed right out of the trailer as he timed the HR Livestock Transportation/3H Cattle/Mobil1 backed No. 83 machine in four fastest.

Lining up fourth in his heat race, Gravel would finish in the fourth spot, but with his qualifying time, he found himself locked into the night’s dash, where he lined up on the front row.

Picking up the Dash win, Gravel would lead the field to green, as he quickly jumped out to a sizeable lead, as he took a liking to the top of the Williams Grove Speedway.

Turning in some lightening fast laps, Gravel found himself in lapped traffic by the 10th circuit, and soon felt pressure from Stevie Smith, who had made some big moves to get into the second spot.

As Gravel’s lead slowly evaporated in traffic, the entirety of it was erased on the 15th lap when the caution waived.

Electing to take the bottom on the double file restart, Gravel was able to surge back into the lead, but Smith stayed glued to him, as they raced around the historic ½ mile speedway.

The duo continued to battle for 12 laps until the caution again flew on the 27th lap, bunching the field back up, but under the yellow, officials deemed that cars had reached the magic number of laps ran, and threw the red to allow teams to refuel.

When the green flag flew again, the duo continued to battle, but on the 28th lap, Smith was able to slide in front of Gravel exiting turn four to officially take the lead on the 29th lap.

Gravel would flank Smith, as he continued to run the razor thing cushion, and also try Smith’s low line, as he looked for an opening to get the lead back.

Coming across the stripe on the 34th lap, Gravel was all over Smith’s bumper, and as they got into turns one and two, slight contact was made getting Smith out of shape, and giving Gravel the lead back.

Over the final few laps, Gravel would hit his marks, as he took the checkered and picked up the win during the National Open.

“I am happy to win, but it just doesn’t feel right,” Gravel added. “We had a really fast car all night, and that is a testament to my team. I can’t thank Troy, Brandon, and Scotty enough for all of their hard work this weekend, as well as Dennis and Teresa Roth for continuing to support us and let us have some fun.”