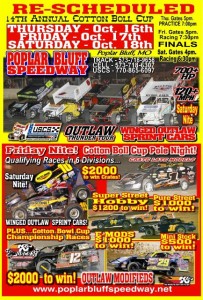 Poplar Bluff, MO – October 8, 2014 – Due to a full weekend of heavy rain in the forecast the 14th annual Cotton Boll Cup event at Poplar Bluff Speedway in Poplar Bluff, Missouri scheduled for this coming weekend has been RESCHEDULED for the following weekend on Friday and Saturday, October 17th and 18th. There will be an open practice at the track from 7pm until 10pm on Thursday, October 16th.

The action-packed event features the United Sprint Car Series presented by K&N Filters winged sprint cars and K&N Filters USCS Outlaw Modified Series as headliners of the 14th Annual Cotton Boll Cup. The event doubles as the Poplar Bluff Speedway 2014 season finale and is a literal “Smorgasbord of Speed” featuring two full nights of high speed action at one of the area’s most popular racing venues. Race teams and race fans will be treated to a full menu of late season Championship speed contests with racing in seven of the area’s most popular divisions with over $60,000 up for grabs.

The event includes the final 2014 season appearances of the USCS “Outlaw Thunder” Tour presented by K&N Filters for winged sprint cars at Poplar Bluff Speedway. It will be the 10th event of the season and third and final visit to the Missouri oval for the K&N Filters USCS Outlaw Modified Series this year. The racing action features nearly 400 laps of racing around the 3/8 mile clay oval including 200+ laps of Cotton Boll Cup Championship main events.

The 2014 version of the Cotton Boll Cup event turns up the tempo on Saturday night (10/18) at 6:30 pm with the addition of the 700+ horsepower, 1300 pound Outlaw style sprint cars of the United Sprint Car Series that are expected to reach speeds exceeding 120 M.P.H. around the area’s fastest 3/8 mile high banked oval. Additionally, all six divisions that contested their qualifying races on Friday night will do battle for their share of the prize money posted in the $60,000 Cotton Boll Cup Championship Finals on Saturday night.

The USCS sprint cars, K&N Filters Outlaw Modifieds and Crate Late Models are each racing for $2000 to win on Saturday night. In addition for the USCS sprint car drivers they will be racing for double USCS Mid South Thunder presented by K&N Filters regional series points. The Super Street/Hobby class is battling for $1200 to win and the Street Stock and E-MOD divisions are both competing for a $1000 payday in the Cotton Boll Cup Finals on Saturday. The Mini Stock racers hope to collect a posted $500 winner’s share in that division.

There is an open practice for all divisions on Thursday, October 16th from 7pm until 9pm. Gates open at 5pm on Thursday night. Thursday Admission is $10. Gates open in the competitor pit area at 4pm on Friday and in the spectator grandstand at 5pm. The Grandstand Admission on Friday is as follows: Adult $15 Kids 6-12 $5 Kids 5 & Under Free.