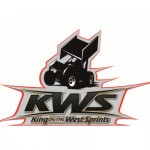 Aptos, CA – (December 15, 2014) – The King of the West 410 Sprint Car Series has officially released its schedule of events for the upcoming 30th anniversary season, which showcases 18 full point events at 10 different venues, along with a pair of co-sanctioned weekends for the first time ever with the World of Outlaws STP Sprint Car Series.

The upcoming season will mark the fifth campaign held under the King of the West Sprints banner and the 30th overall year since the Golden State 410 Series came into existence back in 1986. It will also be the second full season contested with the direction & leadership of John Prentice and Brent Kaeding, who assumed management of the series at the end of 2013. The tour is coming off one of the most exciting years of racing in recent memory and even more is expected in 2015.

The season opens with the first of two co-sanctioned weekends with the World of Outlaws STP Sprint Car Series on Friday & Saturday March 13 & 14 at the Thunderbowl Raceway in Tulare. The co-sanctioned weekends will award drivers & team’s KWS show up points and offers the series a chance to work with the “Greatest Show on Dirt” for the first time. Teams that will be running full time with the King of the West Series in 2015 will also have show up incentives paid during each co-sanctioned weekend, with the details announced in the near future. Tickets for March 13 & 14 are currently on sale by calling the Thunderbowl Raceway box office at 559-688-0909.

In addition to the March weekend the King of the West 410 Sprint Car Series will also compete at the popular Thunderbowl Raceway one-third mile clay oval on Saturday May 16 in the Chris & Brian Faria Memorial, July 25 in the second annual Peter Murphy Classic & on October 10 in the KRC Safety Fall Shootout. The October event takes place the weekend before Trophy Cup, giving teams one final chance to hit the track before the prestigious three-night show is held on October 15, 16 & 17.

The high-banked bullring of Placerville Speedway once again plays host to a pair of KWS events this coming season, with the first being the Gold Country Shootout on Saturday April 4. The event takes place just days before the World of Outlaws STP Sprint Car Series return to the red clay, giving California drivers & teams a chance to get some laps on the action packed quarter-mile prior to the WOO show. The previously held Bullring Nationals will then be revived in the summer with the King of the West 410 Sprints returning to Placerville on Saturday July 18.

The second & final co-sanctioned weekend with the World of Outlaws STP Sprint Car Series takes place at the famed Calistoga Speedway on Saturday & Sunday April 11 & 12. Opening night on April 11 will also see the Civil War 360 Sprint Car Series presented by Flowmaster on hand to make for one of the biggest & most anticipated evening’s of racing seen at Calistoga in recent memory. Weekend tickets are on sale by visiting http://dirtcar.ticketforce.com/eventperformances.asp?evt=163

Along with the April weekend, the King of the West 410’s will also be in action at the Calistoga half-mile on Saturday June 27 during the Wine Country Classic, in conjunction with NASCAR Sprint Cup weekend in Sonoma. Last year’s KWS event featured some of the most entertaining Winged Sprint Car racing ever contested at the Calistoga Speedway, following numerous renovations that have gone on at the facility over the last couple seasons. The track has been given a huge boost, bringing it up to status as one of premier venues on the west coast.

The centrally located Stockton Dirt Track, which enters its third season of operation, will host the King of the West 410 Sprint Car Series on three different occasions in 2015. KWS will invade the 3/8 mile clay oval on Saturday June 13, Saturday August 1 & Saturday November 7 for the 32nd annual Tribute to Gary Patterson. The Tribute to GP is once again championship night for both KWS and the Civil War 360 Sprint Car Series in one huge evening of racing. This past season saw 72-cars pack the pit area to cap the Nor Cal season in grand fashion.

The Silver Dollar Speedway in Chico will hold two King of the West 410 Sprint Car Series events in 2015, with both being special shows on Saturday’s. The first will be on Saturday May 2, which marks the always prestigious 25th annual Dave Bradway Jr. Memorial & the second will be on Saturday June 6, in what will be the 3rd annual David Tarter Memorial. The Bradway Memorial each season is a major cornerstone event for the series and the Tarter Memorial is becoming one as well at the famed quarter-mile clay oval.

For the third straight year the King of the West 410 Sprint Car Series will compete at Petaluma Speedway in the month of May. The date this year will once again be on Mother’s Day weekend and happens on Saturday night May 9. Sacramento’s Willie Croft has been the “King of Petaluma” the past two years and looks to make it three in a row this coming May.

Hosting a pair of events in 2015 is the Ocean Speedway in Watsonville, with the first coming on Friday June 26 and the second on Saturday July 11, which will be the 5th annual Howard Kaeding Classic. The event has become a very special one paying honor to the legendary “Campbell Comet.” The HK Classic weekend also features the Civil War 360 Sprint Car Series vs. Taco Bravo Ocean Sprints on Friday July 10, which makes for a can’t miss double header at the Santa Cruz County Fairgrounds quarter-mile.

Under new management and reopening this season the always exciting Kings Speedway in Hanford will see two nights of competition by the King of the West 410 Sprint Car Series. The first takes place on Saturday September 19 and the second occurs on Saturday October 24 with the 30th annual Cotton Classic, which returns to the Kings County Fairgrounds facility in 2015. The Cotton Classic caps a huge three week’s of Sprint Car racing in the Central Valley, with the KRC Safety Fall Shootout & the Trophy Cup preceding it.

The popular & “vacation like” Santa Maria Speedway/ Ventura Raceway weekend will occur once again this season after a successful debut last year. The dates for the weekend on the coast are Friday September 25 in Santa Maria & Saturday September 26 in Ventura. The inaugural two-night double header last season was well received by all involved, so if you happened to miss it, be sure and make plans to join us this coming September.

“It’s going to be a great year for the King of the West Sprint Car Series,” said John Prentice of Prentice Motorsport Group. “If you look at the schedule you’ll see a number of big events and that’s a major focus. Having special shows is a key for any traveling series and next season you’ll see we have quite a few of them. The schedule worked out great with no conflicts again between KWS, Civil War and the Ocean Sprints, so I can’t thank all the promoters enough for working together to make it happen.”

Info on the King of the West 410 Sprint Car Series can be found at http://www.kwssprints.com