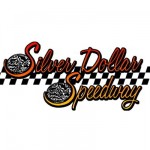 Chico, CA — (December 31, 2014) — The Silver Dollar Speedway is pleased to release a diverse schedule for the 2015 race season filled with a wide variety of motor sports entertainment. The Speedway will host 30 events throughout the upcoming season. As usual, the 410 winged sprint cars will be the staple of the speedway with 18 scheduled nights of racing between the World of Outlaws, King of the West sprint cars and the weekly Friday night point shows. “We wanted to continue and showcase our 410 winged sprint cars,” said promoter Dennis Gage. “We have a solid local supporting cast of 410 teams and it has been a long standing tradition to have Chico run the 410 winged sprint cars during the majority of the season.”

Cars will hit the track on February 20th for an early season night time practice from 6 pm to 10 pm. Two other practices will take place on March 1st and March 13th. All divisions are welcomed.
The first weekend of racing is scheduled on March 6th and 7th with the annual running of the Silver Cup. The event will feature the winged 360 sprint cars, wingless sprints and modifieds.

The first of 15 Friday night point shows begins on March 27th. Two of the Friday night highlights will once again be the Bill Brownell Memorial held this year on April 24th and the Wolf Memorial. This year the 410 winged sprint car main event will feature 33 laps and $3300 to win in tribute to Brownell’s racing number. On August 28th , the final point race of the year will once again pay tribute to Tyler Wolf. The Wolf Memorial will offer extra money incentives for the winged 410 sprint cars.

The World of Outlaws will invade the Speedway three times this year. The first night is scheduled for March 28th with the annual running of the Mini Gold Cup. The Outlaws return in September for the 62nd Anniversary of the Gold Cup Race of Champions. The Outlaws will race on September 11 and 12.

The traveling King of the West Sprint Car Series will make two appearances this year. The first race is the Dave Bradway Jr. Memorial on May 2nd . The Series will return on June 6th and pay tribute to David Tarter once again.

The California Civil War Series will also make two trips to the Speedway. The first visit is on a Sunday night, May 24th, as part of the Silver Dollar Fair. The series returns on September 9th , Wednesday, and kicks off the four nights of racing during the Gold Cup.

The dirt modifieds, street stocks, wingless sprints, hobby stocks, limited late models and economy winged sprints will continue to be a big part of the Speedway in 2015. Each division will hit the track at least eight times throughout the year.

The Speedway will host four events during the Silver Dollar Fair. On May 22nd the traditional Arena/Super Cross kicks off things. Saturday night, May 23rd the 200-lap Enduro race continues to be an annual event. The Civil War Sprint Cars are scheduled on Sunday night. Monday, May 25th the third annual Destruction Derby takes place.

A full schedule is available for print at www.silverdollarspeedway.com

May 29 NO Races-Fair Tear Down

Points kept from March 27 thru August for divisions with 6 or more races. Subject to Change.