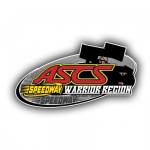 Tulsa, OK — (January 22, 2015) — The Speedway Motors ASCS Warrior Region has released their 2015 lineup with events at nine Missouri ovals for the series 16th season of competition, and fifth under the ASCS banner.

Valley Speedway in Grain Valley, Mo. will kick off the 2015 season on Saturday, April 25 for the series lone visit to the one-third mile oval.

Double X Speedway and Lucas Oil Speedway each show four nights of racing, with three of the four scheduled nights at the “Diamond of Dirt Tracks” paired with the Lucas Oil ASCS presented by MAVTV American Real.

In total five nights of the 2015 season will see combined action with the National Tour, including the series return to Missouri State Fair Speedway in Sedalia, Mo on August 23. TBJ Promotions and Racinboys.com will attempt another Thursday night at Lakeside Speedway during NASCAR spring weekend.

New to the ASCS Warrior lineup, Scotland County Speedway in Memphis, Mo. will host the series on September 4. This marks the first time since Randy Martin’s 2001 victory under the Winged Outlaw Warrior banner that Sprint Cars have been on the lineup at Scotland County Speedway. Other tracks in the mix include Randolph County Raceway with two nights on Labor Day Weekend. U.S. 36 Raceway with a pair of nights, and Callaway Raceway with two nights of action as well.

Larry Hol remains as Competition Director for the Speedway Motors ASCS Warrior Region and can be contacted via email at ldhol@hotmail.com or by phone at 816-804-2333.

For more news, finishes, and all other information on the regions of the ASCS Nation, log onto http://www.ascsracing.com.

Schedule is subject to change without notice.