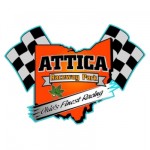 Attica, OH — (February 9, 2015) — The 2015 racing season at Attica Raceway Park is shaping up to be the biggest in the track’s 27 year history with BIGGER shows and BIGGER payouts; enough to lure the top dirt track drivers in the United States.

“This is the 10th year that I’ve been Attica Raceway Park’s promoter. I wanted to celebrate and thank all the race teams and wonderful fans who have supported this track and me for so long. This schedule does ALL of that,” said John Bores, ARP Promoter.

“We’ve seen NASCAR stars race at Attica before like Tony Stewart, Kasey Kahne and Dave Blaney. With this kind of money on the line our great fans may see the next racing super star,” said Rex LeJeune, ARP Director of Operations.

“While the specials offer our fans awesome racing, our weekly Friday night events are just as exciting, especially since the teams will be battling for a record point fund this year,” added LeJeune.

The University of Northwestern Ohio All Star Circuit of Champions then come calling for the first of five appearances at Attica. The traditional HD Supply Spring Nationals will be held Friday and Saturday, April 3 and 4. The nation’s oldest winged sprint car touring series has competed at Attica 104 times in the track’s history.

The next appearance of the UNOH All Stars will be Friday, June 19 to kick off the 33rd Annual Ohio Sprint Speedweek which features 9 straight nights of racing across the Buckeye State.

The final events for the UNOH All Stars at Attica is another of the long-time fan favorites, the Attica Ambush on Friday and Saturday, Sept. 4 and 5. The event includes the Lucas Oil Late Model Series paying $10,000 to win on Friday.

“The Greatest Show On Dirt,” the World of Outlaws Sprint Car Series makes a stop at Attica for the Kistler Engines Classic on Friday, May 29 for the $10,000-to-win affair.

For the seventh season, Attica will play host to the FAST Championship Series with 9 events for the 410 sprint series (Fremont Speedway also has 9 events). At season’s end, the FAST champion will walk away with $10,000.

The JLH General Contractor FAST 305 Sprint Championship Series will also have five events at Attica and five at Fremont and rewards the overall champion with a nice payday at season’s end.

“Attica and Fremont have worked very well together on this great series for our loyal weekly race teams. Rich Farmer (Fremont’s promoter) has worked hard to keep it going after the dedication of Bryan Autullo, Scott Porter and Chris Kettman started and ran it for the first five years,” said Bores.

And while the sprint cars have several big races on tap at Attica in 2015, the late models have their share of special events. Besides the Lucas Oil Late Model Series race, the American Late Model Series will visit Attica on Friday, April 17 and Friday, July 31.

And for the second year in a row, the new Attica-Wayne County Late Model Challenge Series – point races at both Attica and Wayne County Speedway – will be staged with a separate point fund. Attica will host the series on Fridays May 8, July 17, Aug. 7 and Aug. 21.

A change for 2015 will see Attica stick to its traditional Friday night racing following the Attica Fair. In previous year the track switched to Saturday nights following the fair as Fremont was dormant for the Sandusky County Fair. In 2015 races will be held Fridays Aug. 21 and 28 before the season-ending double-header on Friday and Saturday, Sept. 4-5.

“Last year we forced a few of our teams to choose between tracks by switching to Saturday night after the fair. That had an implication on some of our championship chases. We’ve always been known as a Friday night track and we will remain that in 2015,” said LeJeune

And while the race teams have a lot of money on the line in 2015, Attica Raceway Park has several events to thank the awesome fans who make it all happen at “Ohio’s Finest Racing” facility.

On May 1, June 5, July 3 and Aug. 7, hot dogs will only cost $1 and the traditional Fan Appreciation Night on July 3 will include four classes of racing for only $10 general admission.

Also, as has always been the case at Attica, kids 10 and under will get in free and Attica will give away a free bicycle during each event.

For more information and a complete schedule of events go to www.atticaracewaypark.com.