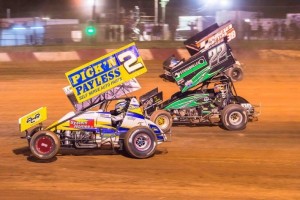 Sydney, AU — (March 26, 2015) — This Saturday is the culmination of one of the most historic Sydney Sprintcar Premierships ever conducted, and it goes right down to the wire between points leader James Thompson and rival Ben Atkinson.

Atkinson has two track championships to his credit already and a bagful of main event wins, whereas Thompson has yet to win a main event or track title in his 15 years.

Regardless of what he has or hasn’t done in the past though 33 year old Kellyville Pest Controller Thompson has been the standout competitor in terms of consistency this summer.

“I feel like I’m really getting the hang of all this,” he admits, “I know it’s been a long time but I feel like I really have a handle on what we need to do every time we go out there. We’ve been sticking to the same game plan every night and it seems to have worked so far.”

There’s only one more night to go, and James has a narrow 27-point lead over the rapidly closing in Darwin racer Atkinson.

“We can’t change the way we’re doing things and think about the Championship,” concedes Ben, “we just have to keep treating every race and every night as it comes. I can’t allow myself to think about the possibilities.”

The possibilities seem to swing in favour of Thompson on paper.

FOR BEN TO WIN:

– Ben has to finish 14 spots ahead of James to win track championship.

– So if Ben finishes 2nd, James has to finish 16th or worse.

– If Ben finishes 12th James would had to have finished 5th in B-Main or worse and not transferred.

– If Ben were to just win the A-Main, James would have to finish 14th or worse.

– If Ben were to win A-Main and lead most laps (4 bonus points), James would have to finish 12th or worse.

FOR JAMES TO WIN:

– Ensure he makes the A-Main

– If Ben wins and leads most laps, finish 11th or better.

So a third Track Championship win for Atkinson is certainly not out of the question but the likelihood of a Sydney battler and father of two wrapping up his first is also seriously on the cards.

Aside from the Track Championship honours though there’s also the matter of the “Month of Money” March prize-money bonus that pays $5,000.

South Aussie Trevor Green aggravated an old back injury last weekend in a crash during the Pole Shootout and as such will miss the Grand Finale.

With the Parramatta Posse that’s an impressive 59 Sprintcars!

The night will also see the many former track champions honored and recognized including:

In addition to the Sprintcars will also be Late Models and Street Stocks.

Gates open at 2pm with hot laps commencing at 5.30pm and qualifying prior to 6pm.

Kids 12 and under FREE

For more information visit www.valvolineraceway.com.au or visit us on Facebook.