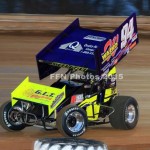 Mechanicsburg, PA — (March 30, 2015) — Ryan Smith is hopeful the kinks are out of the way as he heads into an All Star Circuit of Champions doubleheader this weekend at a track where he’s never competed.

Smith will tackle Attica Raceway Park in Attica, Ohio, on Friday and Saturday for the Spring Nationals with the 410ci sprint car series following his Pennsylvania debut last Friday at Williams Grove Speedway.

“Last Friday was a good shakedown,” he said. “The car was good. The motor ran good. We were going forward and passing cars. It gives us a lot to look forward to this weekend when we go to a new place and race with the All Stars.”

Smith said he has watched video of the third-mile track and he is optimistic that his debut can yield positive results.

“With a little fine-tuning I think we’ll be good,” he said. “If we can put it in the top 10 both nights that’d be like a win for us. I’m looking to come out of the box strong. One of the positives I have going to a new place is that I usually adapt pretty quickly.”

Smith is coming off a solid performance at Williams Grove Speedway, where a high pill draw put him behind the eight ball to start his heat race.

“The track was pretty dry early,” he said. “We were able to pass a couple of cars and should have been third or fourth in the heat. I just didn’t get the wing back quickly enough.”

Smith rallied from seventh to fifth place, which was one spot shy of advancing into the feature redraw. That lined him up on the outside of the seventh row for the main event.

“I was up to sixth or seventh with about five laps to go and we lost the water line,” he said. “We used Friday as a shakedown and we had one small failure. At least it happened now and not next week.”

Smith was credited with an 18th-place result.