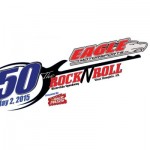 “The Eagle Motorsports Rock ‘N Roll 50 Presented by MyRacePass has been a great event for us,” TBJ Promotions Founder Tony Bruce Jr. said. “It was one of the first we did as a promotional group. The fans there are so passionate and are so excited about the racing season getting started. We are all really looking forward to heading to West Memphis and kicking off our season.”

This year will be the seventh edition of the prestigious 50-lap race, which presents a custom guitar in addition to the $4,000 top prize to the winner.

“One of the best things about the Eagle Motorsports Rock ‘N Roll 50 Presented by MyRacePass is that it’s always a show,” Bruce Jr. said. “The track features side-by-side racing that is exciting to watch from the green flag to the checkered flag. Also, we will have the usual autograph session during intermission to try to get the fans involved and allow the kids to meet the drivers.”

Visit http://www.TBJPromotions.com for the latest news and information. Discounted event tickets can also be purchased via the website.