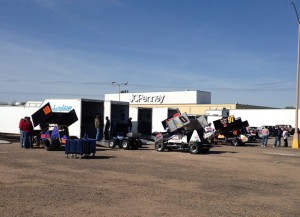 Dodge City, KS — (April 6, 2015) — You can hear it in the air around Dodge City, Kansas. It’s the buzz about this weekend’s season opener after Dodge City Raceway Park’s first car show this past weekend.

Upwards of 20 different teams had their cars on display at Dodge City’s Village Square Mall prior to Saturday’s practice with complimentary Pepsi and water for all on hand.

A strong turnout of fans and fans-to-be got an up close and personal look at the cars in all divisions as well.

A full gallery of photos from the car show is available at http://www.dodgecityraceway.com/media/photos/dcrp-car-show-april-4-2015/.

General admission tickets to Saturday’s action are just $10, with children 11 and under admitted free when accompanied by an adult. Pit admission is $30.

Saturday’s season opener will mark the first of 15 nights of competition at Dodge City Raceway Park with a number of special events along the way, highlighted by the World of Outlaws Sprint Cars Boothill Showdown on July 3-4.

The track’s full slate of events is available at http://www.dodgecityraceway.com/schedule/.