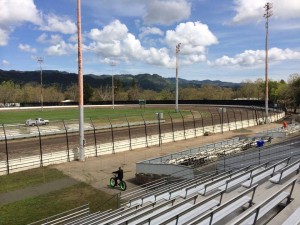 Calistoga, CA — (April 7, 2015) — For the first time since the 2012 racing season, the California Sprint Car Civil War Series presented by Flowmaster will take to the scenic, ½ mile Calistoga Speedway located in the heart of beautiful Calistoga, CA as the series runs in conjunction with the World of Outlaws and King of the West Co-Sanctioned event on Saturday night.

During the series’ last visit to the speedway in August of 2012, it was Princeton, CA driver, Mason Moore, out dueling perennial series favorite, Andy Forsberg, and local product, Mike Benson, to score the win. With so much history surrounding the now 78-year-old facility, the all time winner’s list is a who’s who of motorsports, making this event a marquee event for the series.

With two events in the books already, the series has seen two great races, with 2014 Champion, Shane Golobic winning the opening night event, and Bradley Terrell picking up the most recent round during the series’ first visit to the Petaluma Speedway.

By way of his win and his fourth place finish, Sebastopol, CA driver, Bradley Terrell currently leads the standings, but hot on his trail is Watsonville, CA driver, Justin Sanders, who has two third place finishes so far in 2015.

Sitting in third, is 2015 Rookie of the Year contender, Robbie Price, who hails from Cobble Hill, British Columbia. In limited starts in his sprint car career, Price comes into Calistoga fresh off a fourth place finish at the Petaluma Speedway.

Sitting fourth in series standings, just two digits out of third is Cody Lamar. After setting a new track record in Petaluma, CA during the series’ last stop, Lamar rebounded from an opening lap crash to score a fifth place finish.

Other drivers expected to be in action this weekend are Shane Golobic, Andy Forsberg, Kyler and Koen Shaw, Matt Peterson, Mason Moore, Alissa Geving, amongst many more.

Opening ceremonies are expected to begin at 7pm on Saturday, while the main gate for spectators will open at 3pm, with Will Call & the Ticket Window opening at noon. Two-night weekend tickets and single night tickets are available by visiting http://dirtcar.ticketforce.com/eventperformances.asp?evt=163 or by calling 1-877-395-8606.