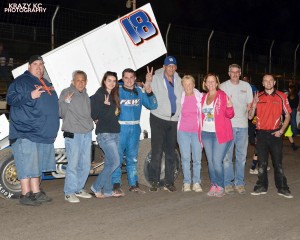 Marysville Raceway seems to suit Justin Sanders, and on Saturday night the Watsonville, CA driver continued a very strong string of finishes at the track as he picked up his second win of the season on Saturday night.

26 cars checked in for the second point race of the season at the Marysville Raceway, and Sanders got things started off by timing the F&W Racing No. 18 machine in third fastest in qualifying time trials.

Working his way up to second in the heat race, Sanders would find himself on the front row of the feature event, as he started alongside Heath Hall. When the action came to life, Hall would get the jump, as Sanders raced in his wake, looking for an opening to take over the top spot.

Relentless in his pursuit, Sanders took his time working the bottom of the speedway, as it looked as if that would be his way into the lead. As the laps clicked off, Sanders began to get stronger, and strong on the low-side of the speedway, and was able to make his move on the 18th lap.

“Coming into the season Marysville Raceway was not one of my stronger tracks, but this team sure has this car dialed in here,” Sanders said. “We have been a contender every night we have checked in to this place, and I am looking forward to getting back here in a few weeks.”

ON TAP: Sanders will be in action at the Ocean Speedway on Friday night before heading to the Thunderbowl in Tulare, CA on Saturday night with the Civil War Series.