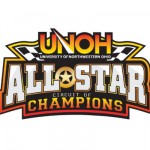 Port Royal, PA — (April 25, 2015) — Cody Darrah of Red Lion made a triumphant return to Port Royal Speedway on Saturday Night to claim nearly $20,000 in the 12th running of the prestigious All Star Circuit of Champions Sprints Bob Weikert Memorial.

In an emotional victory lane ceremony, the former Kasey Kahne Racing driver credited Tony Stewart for the initiative he is putting into the All Stars as the clubs new owner while he also noting his appreciation of winning in front of a Pennsylvania crowd again, with his family all around him after spending several seasons touring across the nation.

The victory was the second of Darrah’s career at the track and it came after several tense moments during the 40-lap Weikert A Main.

In taking the checkers, Darrah became just the second All Star touring driver to claim a win at the historic oval over the Pennsylvania Posse drivers in a history that dates back to 1981.

The initial start of the feature event was called back when Danny Dietrich got sideways in the first corner as the green flag unfurled, making contact with pre-race favorite Greg Hodnett.

Dietrich, aboard a replica Weikert’s Livestock No. 29 sprinter, and defending event winner Hodnett were done for the nigh.

When action resumed, second starter Darrah and polesitter Brent Marks displayed awesome high-speed acrobatics as they repeatedly pulled slide jobs on one another to gain control over the first two laps.

Marks would lead the first lap at the line with Darrah going out front at the line with two circuits completed after a daring and dangerous run at Marks as the pair shot through the fourth turn that saw the two drive toward the outside wall as they raced inches apart, both refusing to surrender the position.

Marks went back at Darrah in the first corner after crossing the line and swooped low to try a pass only to have Sheldon Haudenschild instead capitalize and motor by into second.

The front runners entered the backmarkers on the seventh loop and that’s when Marks reclaimed second with a big turn two slide job on Haudenschild that saw Sheldon give Marks a sender as the Myerstown driver slid up in front to take the line away.

From there Marks began trying to keep pace with Darrah as the leader continued to pile up lap money at the clip of $100 per lap.

During a caution for a stopped Steve Buckwalter on the 16th lap the race went red for a fuel stop and when action returned Marks took a shot at Darrah deep in the first turn.

But Darrah ran his momentum through the turns to pull back around Marks as the duo raced onto the backstretch before again entering traffic with 18 laps to go.

Darrah worked heavy and hectic lapped traffic during the last half of the race, pulling slide jobs on some and slingshots on others to work around the backmarkers and disaster nearly struck with four laps to go when he made heavy contact with Caleb Helms as the pair raced onto the frontstretch.

The contact send Helms hard into the outside wall although he escaped injury.

And then Darrah jetted away to the finish for the win that included the posted $15,000 winner’s share plus another $3,900 in lap money.

And when added in, an additional $100 for winning his heat race earlier in the night made his total event take an even $19,000.

Marks was happy with his second place run and said his race with Darrah early when the pair swapped the lead repeatedly was quite enjoyable.

After starting 12th, Dave Blaney blasted through the pack to pass his brother Dale for third on the 15th lap, where he would finish the night on the podium.

Wolfe took home the $200 Hard Charger Award for his run from 19th to eighth.

Dave Blaney pocketed the $350 Raymond Jacobs Fast Time Award after turning in a lap of 15.909 seconds in time trials over the 44-car field.

Marks took another $100 for claiming the dash while Lance Dewease won the B Main.

Nate Snyder was honored with a $500 award in honor of late speedway president Gerald Clark as the first non-qualifer.

Tim Fedder of Newport won the first econo late model feature of his career in a crash-plagued event.