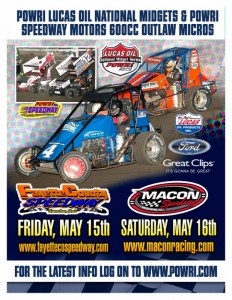 Millstadt, IL — (May 12, 2015) — The POWRi Lucas Oil National Midget Series and POWRi Speedway Motors 600cc Outlaw Micro Series will head to Fayette County Speedway in Brownstown, Illinois on Friday, May 15th. Rained out in 2014, previous winners in the National Midgets at Fayette County Speedway include Brett Anderson (2012) and Michael Pickens (2011). In Outlaw Micros, previous winners include Andrew Felker (2012) and Trent Beckinger (2011). Always a fan and driver favorite, POWRi’s solo appearance for 2015 at the high-banked ¼ mile is one not to miss!

On Saturday, May 16th teams will invade Macon Speedway in Macon, Illinois as the POWRi Lucas Oil National Midget Series and POWRi Speedway Motors 600cc Outlaw Motor Series are set to take the stage. With the weather already claiming the first of six Macon Speedway events for POWRi, fans are anxious to see open wheel racing at its finest at the 1/5th mile high-banked oval. In midget competition, Zach Daum and Bryan Clauson each came out on top in 2014. In the micros, Devin Feger and Nathan Benson claimed feature wins at the track in 2014. Fans can expect to see plenty of rim-riding and slide-jobs galore as both tracks can be described as hammer down and action packed.