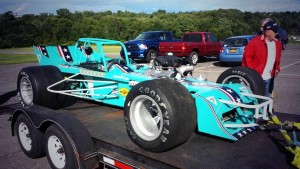 The ’66 racer, now owned by Dave Hollinger, was the machine that brought Shampine to his first victory on July 23 of that year. In 1967, Shampine drove the car to six feature victories and the ’67 Oswego track title.

Eventually selling the car to Ron Gamble, the car later came into the possession of Oswego’s Sharkey brothers. Gamble, Jim Muldoon, Fred Peet, and Joe Paeno all took turns at the wheel before the racer was retired.

Hollinger would come across the car in 2009, during the Sharkey estate auction.

The car first returned to Oswego in July of 2010 during the Speedway’s Old Timer’s Reunion, and came back yet again in 2011 with new Speedway owner John Torrese taking laps at the controls.

After the success of Shampine’s ’66 creation, he debuted the wedge Supermodified in 1969.

Drivers Mark Letcher, Billy Yuma, and Jack Murphy drove the car in ’69, with Shampine finally racing the machine on his own in 1970. Shampine won his first main event in the wedge on May 30 of that year, going on to win 12 main events on the season including his first International Classic and second track title.

The wedge was Shampine’s most successful piece, winning a total of 55 features in his eight years behind the wheel along with two Classics and five track championships.

In 1978 the wedge was sold to a young upstart by the name of Doug Heveron. Heveron qualified for the International Classic with the ride in ’78, finishing 13th. The next year Heveron raced the car to two third place finishes, including the Classic.

Tom Holly would take control of the wedge in 1980, racing the car only one time before selling to Dave Loucks for 1982.

After Loucks untimely passing, local auto racing enthusiast Jim Paternoster purchased the car from the Loucks estate auction and restored the beautiful machine to its 1976 livery, as it remains to this day.

Following the wedge, Shampine unveiled the Supermodified that would set the standard for all racers today – the radical offset.

Steve Gioia Jr. would become the first driver to officially enter the radical offset into an event, driving the machine in September of ’76.

Shampine finally competed with the car part-time in 1977, winning his first outing in the racer on July 30. Shampine won again with the car in August of ’77, before running full-time with it in 1978.

During the ’78 season, Shampine won an incredible 11 features in a row with the 18” offset machine, revolutionizing the sport.

After moving away from the Speedway on a full-time basis, Shampine returned for the 1980 Classic and dominated the 200, leading the entire distance – the first and only time the feat has been accomplished.

In 1981 Shampine sold the offset to Norm Foster, who put young Mike McLaughlin at the wheel. McLaughlin drove a full season with the machine in 1982, becoming the first Supermodified driver to win a feature event in his rookie season.

Following the ’82 season, Foster sold the car to Jamie Moore who fielded the car for several seasons, eventually giving the car its final victory on June 29, 1991 in a 100-lap feature go.

Moore still owns the radical offset and restored the car to its 1980 design just last year.

The final of the four restored racers is the Shampine sprint car, now also owned by Paternoster. Shampine purchased the new chassis from Charlie and Mike Loyd in Pennsylvania prior to 1980, who also built cars for great Smokey Snelbaker.

Shampine drove to victory with the car on more than one occasion with the New York based ESS Sprint Series before moving back to Supermodified competition.

In a once in a lifetime gathering, fans will have the opportunity to see all four of these historic machines at Oswego Speedway on Saturday, May 23 with the chance to relive old memories and embrace new ones.

Pit gates will open on May 23 at 11:30 a.m. with practice getting underway at 1:30 p.m. Time trials for the ISMA Supermodifieds be held at 4 p.m., with the first heat race of the season going green at 5 p.m.

General admission seating will be available for $35, reserved seating $40, and pit admission $40.

Kids 16 and under with paid adult and active military with I.D. are free.

For more information on Oswego Speedway visit online at www.oswegospeedway.com or call (315) 342-0646. Visit the Speedway on social media @OswegoSpeedway or on Facebook at www.facebook.com/OswegoSpeedway.