Dover kicked off the Carpetland Nebraska 360 Sprints event by advancing from seventh to fourth place in a heat race. That earned him a spot in the feature redraw, where he pulled the highest number – eight – to start the 25-lap main event on the outside of the fourth row. 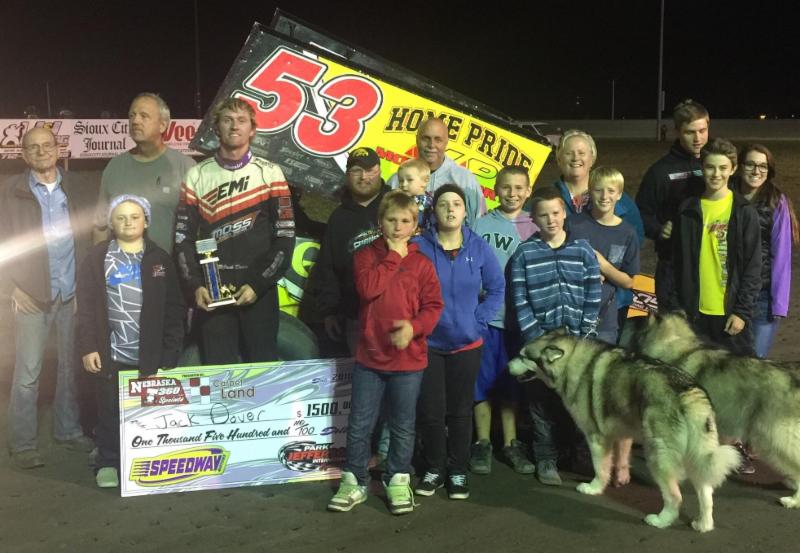 “I made it up to second about halfway through the race,” he said. “I got first place with four or five laps to go. It was so slick everyone was running around the top because there was a good cushion. I went to the bottom and everyone was running the top side. I got in front of the leader and then the yellow came out with three laps to go. I think he cut in front of me and it screwed his entry into the corner. I was able to come out in front of him. After that caution we checked out.”

The win gives Dover five career triumphs at the track – all since 2014 – and it marked his eighth win in the last 16 races. He is now only two wins away from tying his season high of 15 victories.

“It’s pretty sweet,” he said. “It shows how good our momentum is right now and how good everything is working. You have some good guys who were there in Gregg Bakker, Tim Kaeding and Dusty Zomer to name a few. It was a stout field. When you can beat guys like that you know you have something pretty good.”

Dover leads the Carpetland Nebraska 360 Sprints championship standings by 115 points with only one race remaining this season. He only needs to show up to the season finale to seal his second straight championship with the series.

Dover is heading to Lucas Oil Speedway in Wheatland, Mo., this weekend for the Hockett/McMillin Memorial, which features Lucas Oil ASCS National Tour races Thursday through Saturday. He finished sixth at the track in May during his only visit this season.

Thursday through Saturday at Lucas Oil Speedway in Wheatland, Mo., for the Hockett/McMillin Memorial with the Lucas Oil ASCS National Tour

True Trucking is a trucking company based in Gretna, Neb.

“The True’s are family friends who have always been there to support me,” Dover said. “I appreciate their partnership and look forward to reaching Victory Lane with them a lot.”