Brodix rookie of the year candidate Kirby Robe started alongside Davis for the twenty-five lap feature but it was Davis quickly jumping out to a six car length advantage. Third starting J.D. Johnson, Trevor Grossenbacher and Robe gave chase with the pace quickly coming to halt on lap two when Airflow Racing Products hard luck driver A.J. Selenke got sideways in turns one and two then was collected by Luke Cranston to bring out the first of three cautions flags on the event. Both drivers retired to the pits.

While under caution, defending series champion Garry Lee Maier, who was running eighth, stopped on the track but would return to the event, restarting at the tail of the field.

Once racing action resumed it was still Davis, followed by Johnson, Grossenbacher, Jeremy Campbell and Aaron Berryhill with the leader quickly opening up a sizeable advantage by lap five.

The races second caution would wave on lap ten when Doug Lovegrove slowed to a stop on the backstretch.

On the restart it was the same tune with Davis continuing to set the pace with Johnson the only driver able to keep pace.

The caution would wave for the final time on lap twenty-two when Brodix rookie of the year contender Tanner Mullins came to a stop with a flat right rear.

On the final restart there was no stopping Davis as he led the final three laps to take his first career O’Reilly/NCRA sprint car victory.” Starting up front, I really didn’t know where to run or who was coming,” said Davis, driver of the Morgan and Chelsea Racing/Cook Enterprises/Crankcase Service Inc. Maxim chassis sprinter. “The car was starting to shake there at the end but we just kept going. I have never had very good luck here so about time things turned around.”

The eight lap heat races for the twenty-six car field were won by Davis, Robe and Campbell while rookie Jordan Whitehead topped the twelve lap “B” feature.

The next event for the O’Reilly/NCRA sprint car series will be held on Monday night, May 31st, at 81 Speedway.

The O’Reilly/NCRA sprint car series is entering its 21st consecutive season while the series itself is in the midst of their 40th season of sanctioning dirt track races throughout the Plains.

The series would like to thank the following for their partnership with the O’Reilly/NCRA sprint car series for the 2010 race season. 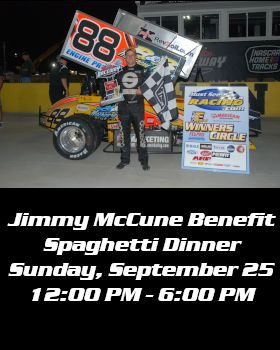