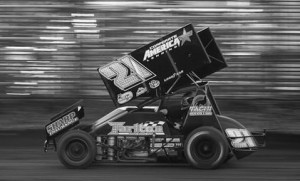 Easton, CA shoe, Tommy Tarlton will kick the 2012 season off on Saturday night at the Marysville Raceway Park in Marysville, CA aboard his always strong Corporate Lending America/Tachi Palace & Casino/Sharp Insurance No. 21.

Tarlton will look to back up an impressive 2011 campaign that saw the veteran driver compete in 41 races and record nine wins as he also captured the inaugural ASCS Southern California championship.

In 2012 Tarlton will look to pick and chose his way around the West Coast competing in a variety of both 360 and 410 events aboard the Tarlton and Sons/Bandy and Associates/Pro Signs entry.

“We had a great year last year, and I am very excited to strap back in and get 2012 underway,” said Tarlton.

Back again with Tarlton in 2012 will be long-time crew chief, Paul Baines. The duo has been one of the most potent combinations over the last few years, and expect the same caliber of racing this year.

“Paul Baines has been working his tail off this winter, and we will look to have a strong car this weekend, and for the duration of the season,” continued Tarlton.

The Tarlton team has some very special plans for 2012 that include several events will be ran in honor of various charities so fans are encouraged to keep on the look out for those announcements.

Tommy would like to thank Corporate Lending America, Tachi Palace and Casino, Sharp Insurance, Bandy and Associates, and Pro Signs for their continued support.

ON TAP: Tommy Tarlton and his Tarlton and Sons team will be in action Saturday night at the Marysville Raceway Park in Marysville, CA.