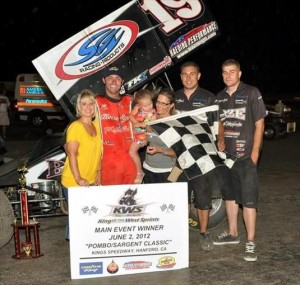 Bud Kaeding it exciting Saturday night, as the third generation driver grabbed the lead in Hanford, CA late, and fended off Evan Suggs, as he picked up his third career Pombo/Sargent Classic win, and his first since 1998.

Kaeding made it happen on a very slick and tricky track as torrid temperatures, and winds haunted the central valley on Saturday.

Scoring a second place finish behind Willie Croft, Bud transferred directly into the feature event and the dash where he finishes in the seventh spot, putting him in the fourth row on the ultra slick Kings Speedway.

The race got off to a slow start as it was marred by two cautions, and a red within the first six laps.

When the race got it’s first extended run of the night, Kaeding made moves, and made them quickly as he excited the crowd running the ragged edge of the speedway as he chased down his brother, Tim.

When the caution flew on the 18th circuit, Bud had reached the second and shared the front row for the double file restart with his relation.

Though Tim got the jump on the restart, Bud hounded his brother, as threw a ‘super-slider’ on him on the 21st laps to take the lead and began to make separation between himself and the field.

With the race winding down, Evan Suggs moved into the second spot and began pressuring Bud.

As the white flag flew, Suggs threw a slide-job on Bud in turns three and four, but Kaeding was able to turn his mount back under Suggs, and narrowly beat him to the stripe and win in exciting fashion.

“That’s about as good as it gets right there,” said a jubilant Kaeding. “I hope all the fans enjoyed that, because that’s pretty good sprint car racing. I can’t say enough about all my guys working hard all night, and have to thank all the partners we have that make this possible.”

The win is Kaeding’s seventh on the year, putting him in a tie for third in the wins list in the country.

Kaeding was also in action on Friday night at Ocean Speedway Watsonville, and narrowly missed out on a weekend sweep.

Starting in the seventh spot on the slick speedway, Kaeding piloted the Werbach Motorsports through the field, and seriously challenged race long leader, Ronnie Day, for the lead during the back half of the race.

In the caution plagued race, Kaeding and Day slicked and diced, but as they would approach traffic, the caution would negate progress, and at the stripe Bud finished in the second spot.

ON TAP: Bud Kaeding will again do the Watsonville and Hanford double as he is set for two nights of action aboard the Werbach Motorsports No.20 and will also run the BZE No.29 non wing car at Hanford.