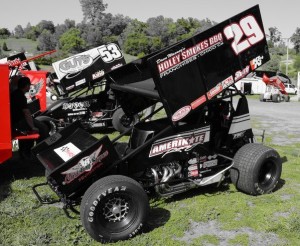 Sacramento, CA driver, Willie Croft made the most of a late parts malfunction and scored a sixth place in the Pombo/Sargent Classic at the Kings Speedway in Hanford, CA.

With 24 cars on hand, Croft timed his Holey Smokes BBQ/Christian Stover Foundation/A.R.T. machine in third quickest during time trials, placing him in the second row of the third heat.

Grabbing the win in the heat, the driver known as Double Down made a stop in the dash, where he finished eighth thus putting him in the fourth row for the feature.

The early part of the race was hampered by a number of stoppages, but Croft was slowly able to work his way into the top five within the first six laps.

Over the next 12 green flag laps, Croft was able to slice is way up to the third spot on the slicked off 3/8 mile track as the caution flew on lap 18.

Restarting behind the Kaeding brothers, where he fell back to the fourth spot but hounded the top three, until he had issues with a right rear shock mount and ended up off the Kings Speedway and made an evasive behind the scoreboard and was still able to bring it back to sixth at the finish.

“We had a pretty good car tonight, and the track slicked off and made it pretty racy,” explained Croft. “After that restart we lost a bolt that holds the shock on the car, and held on and ended up off the track at one point, but came back to a sixth place finish.”

Willie Croft would like to thank Holey Smokes BBQ, The Christian Stover

ON TAP: Willie and his team will now get ready for a busy stretch as they kick off the Road to Dirt Cup on Friday June 8th at the Silver Dollar Speedway before heading to the Southern Oregon Speedway in Medford, OR on Saturday June 9th.