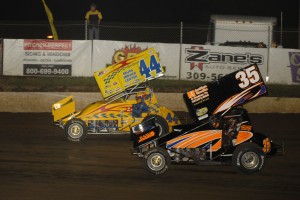 Jimmy Hurley may have only led from the middle of turn three on the last lap to the checkered flag but it was the checkered flag falling for him that counted. Aaron Bruns jumped into the early lead of the twenty five lap MOWA Sprint Car main event at the drop of the green flag and looked like he was well on his way to the feature event win as he built a dominating lead over the first twenty laps. As Bruns began to slow in the closing laps, Hurley put on a charge to the front and was able to dip below Bruns in turn three of the final lap. There was contact between the two drivers with Hurley continuing onto the feature event win as Bruns recovered to grab the second spot. Joey Moughan took the third spot followed by Jim Moughan in fourth and Ben Wagoner in fifth. Jerrod Hull blasted to a lap of 11.786 to claim the qualifying top spot with Gary “Bubba” Altig, Robbie Standridge and Critter Malone taking the heat race wins. Joey Moughan grabbed the checkered flag in the Dash.