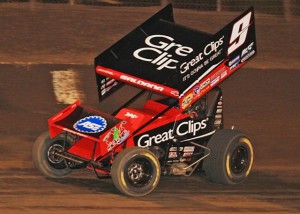 Perris, CA — (March 19, 2013)  The only Southern California appearance of the world’s fastest sprint cars, the legendary World of Outlaws STP Sprint Cars, is less than one month away at the “Southern California Home of Major League Sprint Car Racing,” Perris Auto Speedway. The date to mark on your racing calendar for the “SoCal Showdown” is Saturday, April 13th.

Currently contesting a swing through the state of California, The PAS date will mark the “touring hombres” final date in the Golden State before heading to El Paso, Texas on April 16th.

Last March the World of Outlaws returned to the famous Riverside County clay oval for the first time since 2007.  Brownsburg, Indiana’s Joey Saldana beat Californian Jason Meyer and “The King of the Outlaws,” Steve Kinser for a popular win in front of a large, enthusiastic crowd. Saldana, who was second in WoO points after last Saturday’s race at the Thunderbowl Raceway in Tulare, will be back to defend his “SoCal Showdown” crown on the speedy PAS half-mile clay oval.

Media, attached to this release is a photo of Saldana on his way to the win at The PAS in 2012.  Please feel free to use the photo and please give photo credit to Doug Allen.

Through the Tulare race, 34-year-old Owasso, Oklahoma native Darryn Pittman, who drives a car owned by NASCAR star Kasey Kahne, sits on top of the championship point standings.  Pittman has two victories in the first eight races of the season and leads Saldana by 83-points.  San Jose, California resident Tim Kaeding, who also has two wins, is the only other driver with more than one victory in 2013.  Elk River, Minnesota’s Craig Dollansky, five-time Outlaws champion Donny Schatz of Minot, North Dakota, Dover, Missouri’s Danny “The Dude” Lasoski and Altoona, Iowa’s Terry McCarl have one win each in 2013.  All are expected to be on hand at The PAS race in April.

Lasoski set The PAS all-time one lap track record with a sizzling 13.875 on February 23, 2002.  That is nearly two seconds faster than the quickest ever lap for a traditional (wingless) sprint car at The PAS.  That record will certainly be challenged on April 13th.

In addition to the previously mentioned stars, Jac Haudenschild, Kraig Kinser, Sammy Swindell, Paul McMahan, Cody Darrah, Jason Sides and Chad Kemenah are all expected to be on hand along with a bevy of California stars.

The popular California Lightning Sprint Cars will also be on the card when the Outlaws invade the Southland for the early spring show.

Fans who order reserved seats in advance will get a FREE fan pit pass so they can meet the drivers and get an up close look at the cars.

Advance tickets for your only chance to see the World of Outlaws in Southern California in 2013 are available now at the following link online: http://dirtcar.ticketforce.com/ordertickets.asp?p=284&backurl=default.asp. You can also order by phone by calling: 1(877) 395-8606

To keep up with all of the latest Perris Auto Speedway news, photos, gossip and receive special offers, sign up at The PAS Facebook site at:  http://www.facebook.com/home.php – !/pages/Perris-Auto-Speedway/11387679868

You can also keep up with the latest news and receive special offers from The PAS Twitter site: http://twitter.com/perrisautospdwy.