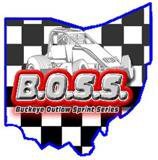 Without a doubt, racing is a family affair. Tonight, the BOSS series had three sets of “father/son” teams on the race track at Pittsburgh Pennsylvania Motor Speedway. In the end, a memorable victory lane would feature a jubilant first time series winner in Gibsonburg, Ohio’s Tony Beaber who was joined in victory lane by his father, Johnny Beaber who himself finished 11th place. Beaber later said he had grown up in victory lane as a child at PPMS when his father had won there. Beaber then said, “to stand next to him again 30 years later in the same spot, WOW!”

The 20 lap A-Main would find Dustin Smith and Aaron Middaugh bringing the 20 car field to the green flag. Smith, piloting the Lou Gagliardi owned #91 was driving in relief of the injured Mark Cassella, and Smith wasted little time in charging to a commanding opening lap lead with third starting Adam Miller in hot pursuit. An early caution would fly on lap 2 for a stalled Gary Rankin on the frontstretch.

Back under green, second running Adam Miller took a dive to the bottom in an attempt to wrestle the lead from Smith, with Miller leading briefly through turns 1 and 2, but Smith was able to slingshot back into the lead off the high side. Once again Smith began to open up a comfortable lead, but contact with the wall was made in those early laps leaving Smith nursing a damaged race car throughout the remainder of the event. Working lap #7, Mike Miller of Wapakoneta, Ohio was able to slip inside Smith to lead, but Smith was able to once again use the high line momentum to power his way back to the lead. However, the race’s second caution flew working lap #9 when Adam Miller spun in turn #1. Scoring reverted back to the last completed lap, putting Mike Miller back to the lead.

At this point, eighth starting Tony Beaber had worked his way to 3rd while 9th starting Andre Layfield would restart 5th. As the action resumed, Mike Miller rolled off into turn 1 as the leader, but a determined Dustin Smith once again rode the high line to briefly retake the lead off of turn 2 and down the back straight. But by the time the field came off turn 4 to complete lap #9, Miller had once again taken command. The third caution then flew when Adam Miller spun for a second time.

By lap #12, Beaber had claimed the outright lead of the event, but now all eyes were on the black #21 of last year’s winner Andre Layfied of Grafton, West Virginia who had been reeling in the lead pack for several laps. Layfield finally cleared Mike Miller to claim second, but then found himself unable to get any closer to the leader. Then, with just 5 laps remaining, Beaber rode a little too close to the wall in turn 1 and 2 and made significant contact, slowing his speed momentarily. As the laps wound down, Layfield found himself suddenly closing on the lead and with the white flag in the air, he decided it was going to be “wreckers or checkers.” Layfield finally got a little too close to the wall down the backstretch making heavy contact and spinning the #21 going into turn 3.

That 4th and final caution then set up a one lap shootout for the win. But Beaber was not to be denied as he held off a very determined Dustin Smith on the final lap with Mike Miller, Kirk Jeffries, and Chad Wilson rounding out the top 5. Heat race events were won by Mike Miller, Dustin Smith, and Andre Layfield. Tony Beaber has now vaulted into the series points lead as the series now moves on to another doubleheader weekend July 5-6 at Lernerville Speedway and Sharon Speedway.