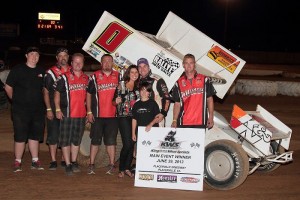 When the Jim Raper Memorial Dirt Cup rolls around, Jonathan Allard seems to come alive. Following his triumph last weekend, Allard returned home and picked up two more wins over the weekend, including a last lap pass at the Placerville Speedway.

“I can’t say enough about his team, and all of our sponsors right now,” Allard said. “We have an outstanding relationship with Factory Kahne Shocks and they are really helping us out right now.”
Friday night Allard stopped in at his home track, the Silver Dollar Speedway, and dazzled the crowd with a dominating performance.
With 17 cars on hand, Allard blazed around the speedway with the third quickest lap of the night during time trials
Starting fifth in his heat, Allard scored a  fifth place finish in heat race action, putting him in the inversion where he started seventh in the feature event.
Working his way to the front, Allard had a very strong racecar, and once he took the lead form Sean Becker, around the halfway point, he never looked back, as he at times had a seven second lead on the field as he picked up the popular win.
Heading to the Placerville Speedway on Saturday night, Allard looked to keep his hot streak alive at the bullring track.
With 23 cars on hand, Allard again timed in second quickest before scoring a second place finish in heat race action.
Starting third in the Dash, the four-time Dirt Cup Champion tallied a second place finish, putting him on the front row for what would be a very wild feature event.
Marred by several caution, and red flags, Allard was out in front comfortably all night, as he kept Shane Golobic at bay.
During a final eight lap run to the finish, Allard got held up behind a lapped car coming to the white flag, and Golobic took the lead.
Heading into turn three, Allard went high as Golobic went low, and made the winning pass as he came to the checkered flag.
“If you race fans didn’t like that, I don’t know what else to do, because that was an awesome race right there,” Allard boasted on the front stretch. “After last night’s win in Chico, it is awesome to get back with the KWS and win.”
With the win, Allard moved up into second in series standings.

ON TAP: Jonathan and his Williams Motorsports team will return to action with the King of the West Series this weekend at the Reno-Tahoe-Fernley Raceway.