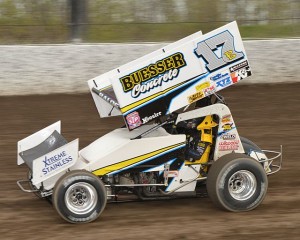 Beaver Dam, WI —  (August 3, 2013) —  It was a showdown at Beaver Dam Raceway with all the top Bumper to Bumper IRA Outlaw Sprint series stars in action. Presenting one of its strongest fields of 2013, 33 drivers checked into the pit area and the field included two-time series champion Travis Whitney who was making a rare appearance outside his selective IRA schedule which had been limited to the series northern most races.

Fresh off a victory on the All-Star Circuit of Champions tour last week Whitney ran among the leaders contending for the win this evening.

Also on hand were standout 360 pilots Scotty Thiel and Ben Schmidt as they continue to explore the possibility of running for the rookie of the year title in 2014.  360 graduates Jeremy Schultz and Lance Fassbender have been great additions to the 410 sprint ranks with the IRA this season.

The past few races at Beaver Dam have been a showdown between Mike Kertscher and Bill Balog with the pair holding fast to the top two spots.  Tonight was no different as the pair raced for the win after an unfortunate accident eliminated racer leader Mike Reinke who appeared to have the speed to break the aforementioned duo’s grip on the winner’s circle.

When the checkered flag fell it was Balog standing behind the Bumper to Bumper IRA Outlaw Sprints victory banner for the 11th time this season.  The A-main win was the 56th for Balog in IRA competition, second only to nine-time series champion Joe Roe who amassed 61 victories to match his famous car number.

With the field narrowed down to 22 after an impressive B-main event, the 30 lap feature contest rolled off with Mike Reinke and Todd Daun pacing the field to the green flag.  The initial start was negated as Bill Wirth came to a stop in turn two.  He was able to rejoin the field for the start after visiting the work area.

One lap would go in the books before leading Rookie of the Year candidate Jeremy Schultz looped his ride in turn two while running in the fourth spot.  The evening would prove difficult for the series rookies.  Fellow rookie Lance Fassbender had his front suspension fail in his heat race resulting in a hard hit to the turn two wall ending his evening early. Schultz also had front suspension difficulties resulting in a second caution on lap seven as he narrowly avoided the same type of accident that claimed Fassbender.

It would be Reinke who took the lead at the initial green flag setting the pace and setting the pace on successive restarts while second place boiled down to a duel between Steve Meyer and Whitney.

With Reinke out front showing the way around the track, the battle for second became a three car showdown with Meyer and Whitney waging their war and Balog working his way into the mix.  Coming off turn two on lap nine, Whitney wiggled on the high side giving Meyer the advantage and opening up a center lane on the racing surface.  Balog was quick to take advantage of the opportunity and shot between both Whitney and Meyer to steal the second position.

By the halfway point of the contest Reinke was impressive on the high side of the track. He led the way around the third-mile clay oval working lapped traffic with Balog in tow. On several occasions Balog drew even with Reinke, but Reinke would power off the cushion maintaining the lead and he was able to repel each passing attempt.

Further back Meyer and Kertscher were having a similar duel third while Whitney slipped back in the field.

With ten laps to go in the contest the complexion of the event would change dramatically.

Nick Alden who had been running solidly just outside the top ten lost traction in turn one spinning and coming to rest in the center of the track.   The leaders were directly behind him and both Reinke and Balog attempted to miss Alden’s ride using the high side of the track.

Everyone was successful in missing Alden including the leaders, but Reinke and Balog made contact resulting in Reinke’s machine going for a tumble in turn two ending his shot at the victory.   Balog’s ride also nearly flipped but he was successful in landing the car back on all four wheels.

After the red flag, the field gathered up resume action with Balog, Meyer, Kertscher the lead trio.  Scott Uttech who had been patiently working the low groove on the track had clawed his way past Whitney into fourth and Whitney maintained the final top five position.

The green flag returned and Balog shot back to the lead with Kertscher squaring off for the runner-up spot.  Kertscher would gain the position on lap 21 and now sought to run down Balog.

Kertscher got his opportunity when misfortune struck Russel Borland on lap 23.  Borland nearly rolled his ride while trying to exit the racing surface to the infield with failed steering components creating the final caution of the event.

Back underway Kertscher challenged Balog for supremacy but would nick the wall in the process.  Though Kertscher’s maintained the second spot the duration of the race he was no longer able to reel in Balog who took the checkered flag with a sixth car length advantage on Kertscher.

Kertscher was able to hold the runner-up spot with Meyer gaining his second straight podium finish taking third this evening after finishing with runner-up honors at the most recent IRA show in Antigo, Wisconsin last week.

On the final lap Whitney would sail past Uttech for the fourth position and Uttech rounded out the top five finishers.

Both Neitzel and Thiel had impressive runs after transferring from the B-main.  Theil’s efforts were exceptional having flipped his machine on the opening lap of the heat race after contact with the ride driven by Brandon Thone.  His crew made repairs in time to push off the B, where he finished fourth.  In the A-main Thiel started 20th and had worked as high as sixth before settling for an eighth place finish.

13 cars were on the lead lap at the finish with 17 drivers reaching the checkered flag.

In the B-main Neitzel would fend off Bill Wirth for the victory.  Dave Uttech, Thiel, Kris Spitz and Todd King comprised the top six and were transfer cars to the main event.  The race for the final spot was hard fought for both King and seventh place finisher Phillip Mock.

King had to race to sixth after spinning when he tangled with a lapped car at the halfway point of the contest, while Mock fought an uphill battle all evening as mechanical ills negated any qualifying effort forcing him to start at the tail of each event.   The pair charged through the pack with King edging Mock for the final transfer spot.

The series now takes off one week allowing drivers and crew members to attend the Knoxville Nationals.  Balog will be representing the Bumper to Bumper IRA Outlaw Sprints in sprint car racing’s most prestigious event.

Racing will resume with back to back shows at Wilmot Raceway.

As part of the Kenosha County Fair action returns to Wilmot Raceway on Friday night August 16th.  Tony Stewart will be back in action with the IRA Sprints having previously visited the IRA at the Sheboygan County Fairpark in Plymouth, WI back in June where he edged out Balog for the victory.  Stewart will have plenty of competition for the victory Friday night as a large field is expected.

Racing then continues the following night on Saturday August 17th with the Roger Iles Tribute showcasing a 36 lap main event.  In addition Carriage Auto Body will be putting up additional funding for the race including a bonus payout to the top three point earners of the weekend.

For more information on the IRA Outlaw Sprints check out the tour website at www.irasprints.com or logging onto the series Facebook page at www.facebook.com/irasprints

The IRA Outlaw Sprint Series is proudly supported by Bumper to Bumper Auto Parts & Service Centers, Hoosier Tire, Osborn & Son Trucking, TW Metals, Onan, Carriage Auto Body, Polaris DEFENSE, and Mother’s Polishes and Waxes. The office of the IRA Sprints can be reached at 815-759-9269 or by e-mail at steve@irasprints.com