Tommy Tarlton was the class of the field on Saturday night at the Ocean Speedway in Watsonville, CA, however coming to take the checkered flag, he got into the cushion too hard, and had a remarkable save to bring home a third place finish during the Johnny Key Classic. 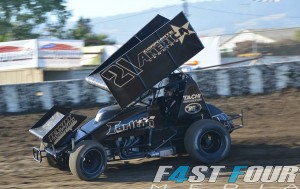 “We had been struggling the last few times here at Watsonville, but tonight this car was awesome, and I’m bummed for everybody that we came up short on winning this Johnny Key Classic race again,” he said.

Needing to race his way into the feature, the Easton, CA driver timed in sixth fastest against the 34 drivers vying for one of 18 open positions in the feature event.

Starting third in his ‘B’ Main, Tarlton got into the second spot where he got in line and followed Brent Kaeding across the stripe, to earn a spot in the 50-lap feature event, where he started in the fifth row.

When the race went green, Tarlton quickly showed he had a fast racecar, and was a huge threat to defend his 2012 Johnny Key title, as he was up into the fifth spot by the 11th lap.

When the track having two great racing groves, Tarlton found the cushion to his liking, as he was able to make most of his positions up by exiting off of the thick, turn four cushion.

On a lap 12 restart, Tarlton continued to make moves aboard his Corporate Lending Investments/Tachi Palace and Casino/Tarlton and Son entry as he cleared Brad Furr, Bud Kaeding, and Kyle Hirst over the next seven laps to work into the second spot, as he chased after DJ Netto.

Chasing after Netto, Tarlton made contact with the turn four wall as the red flew for Brad Furr, and as it was on the 24th lap, officials elected to open the red flag, for the mandated open stop, allowing Tarlton’s crew to make repairs on his machine, and give him some minor adjustments.

When the race resumed, Tarlton did not let Netto out of his sites as he chased after the youngster for the next nine laps, before he had a huge run, and he took the lead on the 33rd lap, and instantly broke away from the field.

Building his lead up to nearly a straight away at times, Tarlton was only challenged one time, as he got into thick traffic, and Rico Abreu was able to pull along side him, but we hit his marks and was able to continue to use the turn four cushion to his advantage.

Taking the white flag with a sizeable lead,  ‘The Night Rider’ looked to be on his way to his second consecutive triumph at the Johnny Key, but navigating a slower car, Tarlton missed his entry into turn three, and slid up to the cushion, rather then entering on it, and upset his car, and getting into the wall, opening the door for Abreu and Tim Kaeding, and he gathered his machine up, and crossed the line in the third spot.

“We had a great car, and I did not know how big of a lead I had, and pressed a little to hard in that final corner,” he said. “I had a couple cars ahead of me, and I changed my entry a bit to work with them, but I slid up and got in the cushion way to hard. I have to thank my guys, they worked so hard tonight, and gave us a fun car to drive.”