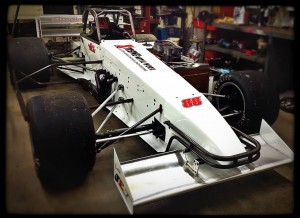 London, ONT – (August 28, 2013) – Ryan Litt and his BS&B Radiator racing team struggled with mechanical problems in ISMA Supermodified action earlier in August at Delaware Speedway and Sunset International Speedway, but had a solid 5th place effort in the Must See Racing Xtreme Sprint Car series event at Berlin Raceway last weekend. Ryan is ready to run his first laps at Oswego Speedway at the International Classic 200 this weekend.

Ryan was on the move at Delaware on August 16. He was racing in the top 5 before the halfway mark of the 75 lap ISMA feature at his home track when the brakes on the #88 “LairJet” Supermodified went away. He was able to persevere and get an 8th place finish.

“It was great being back at Delaware and seeing lots of old friends,” says Ryan. “Unfortunately we didn’t have the run that we wanted.”

Sunset International Speedway near Barrie, Ontario was a new venue for many Supermodified drivers on Sunday, August 18. The day started off well again, but went south quickly. Ryan did not finish the 75 lap feature, and was credited with 14th place.

“The day started off good with us being 3rd quick in practice,” says Ryan. “From there things just kept getting worse. (We) missed the setup in the heat race, and overdid it the other way for the feature. It was a nice facility, but a little too small to showcase these cars to their full potential.”

Ryan and the team went back to a place where they’ve tasted success before last weekend when they took their #07L Sprint Car to Berlin Raceway near Grand Rapids, Michigan. They were rewarded with a 5th place finish in the Must See Racing Xtreme Sprint Car series event.

“Felt great to get back to our normal race car where everything is the way we want it,” says Ryan. “We were working on getting the car right for the feature, and because we weren’t running for points (we) didn’t really bother with the day time races. We qualified decent, but unfortunately dropped out of the heat race, and that put us out of the dash, so we had to start a little deeper than we should have. We still progressed throughout the race, and had a solid top 5. The car was getting better as we went, and that place is always tricky to nail the setup and pass cars, so we’ll take a 5th.”

Next up for Ryan and the BS&B Radiator team is a very special weekend. Ryan will circle the famed Oswego Speedway in New York for the first time in his racing career this weekend as he attempts to qualify for the International Classic 200, the richest and most prestigious event in Supermodified racing. He will be back in the Dave Lair-owned #88, and driving a Supermodified without a wing for the first time in his career as well.

“This is probably one of the highlights of my career, for me personally,” Ryan says. “Oswego is a track I grew up at, and I went to a lot of races there throughout the years. All of my favorite drivers when I was younger were Supermodified guys, so it’s going to be a big thrill to finally be a part of it myself. The track has so much history, and a lot of good Canadian drivers have done well there. I’m going in with the mindset of not expecting too much. The car is still a work in progress, and I have never driven a Supermodified without a wing, so I would just like to make the race and go from there. It’s a long race, and anything can happen.”

RIDE WITH RYAN
Make sure to check out Ryan’s HD in-car camera footage. Just go to Ryan’s official YouTube profile at www.youtube.com/user/RyanLittRacing to watch the videos…and crank up the volume!

BE AN INSIDER
Do you want to be an insider and have Ryan Litt Racing news delivered straight to your e-mail? Got a question for Ryan? Just send an e-mail to ryanlittmedia@hotmail.com and we’ll do the rest. Questions may be featured in future Ryan Litt Racing news updates so be sure to include your name and hometown!