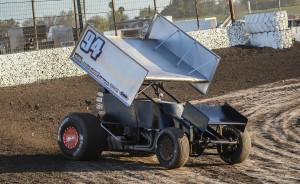 Back in action on Saturday night aboard his STR No. 94 for the Civil War Series opening event, Steven Tiner’s night came to an abrupt halt on the opening lap of the feature event, as contact knocked out the front-end of the Visalia, CA driver.

“We really had a pretty good racecar during the night, but we had some bad luck on the start of the race, and don’t really know what we had for the feature event,” Tiner said.

Timing his Larry Davis Farms/Wright Process Systems machine in sixth fastest, Tiner went on to score a fourth place finish in his heat race, putting him in the 30-lap feature event.

Just missing out on a Dash berth, Tiner lined his BR Motorsports/King Racing Products entry up in the fifth row for the feature, and coming out of turn two on the first lap, Tiner got pinched by Billy Wallace and Jeremy Burt, and his front end was knocked out, and his night was over.

“It really wasn’t anybody’s fault, just a product of tight racing on a tight bullring,” Tiner said. “We timed in well, were decent in the heat, and I think we had a pretty good car for the feature, but just had some bad luck.”

ON TAP: Tiner will return to action with the California Civil War Series Presented By Flowmaster on Saturday March 29th, at the Antioch Speedway.