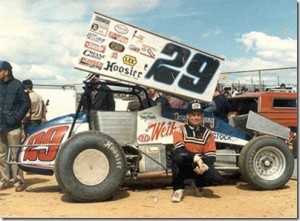 Roseville, CA — (May 12, 2014) –Sioux Falls, South Dakota sprint car legend Doug Wolfgang has been named the Grand Marshall for the upcoming Wine Country Classic race at Calistoga Speedway on Saturday night, June 21st.  Wolfgang’s appearance will highlight the return of California’s only traveling 410 winged sprint car series, the King of the West Sprint Car Series. The last event for the King of the West at the historic half-mile speedway took place on May 27, 2012 when nearby resident Rico Abreu picked up the popular win in just his second career start at the track.  Wolfgang will have copies of his book Lone Wolf available for purchase at the track.

The sprint car wins and accolades for Wolfgang are staggering.  He began his career in 1970 driving super modifieds in the Sioux Falls area. He stepped up to the more powerful sprint cars in 1975 and thus began his great assault on the rest of the sprint car community. He has won 600 feature races in his stellar career.  Wolfgang is fifth on the all-time wins list for the World of Outlaws with 107 feature wins.  The National Sprint Car Hall of Fame selected Doug Wolfgang as the eighth best “Drivers of the Century.”  He was voted Driver of the Year by the National Sprint Car Racing Poll in 1985 and ’89.

He is a member of the National Sprint Car Hall of Fame as well as the Hoosier, Iowa and Nebraska auto racing halls of fame.  Wolfgang has won the biggest sprint car races in the country including the Knoxville Nationals, Williams Grove National Open, Jackson Nationals, Tuscarora 50, Sharon Nationals and the Kings Royal. In 1985, he won 55 races in 85 starts and an incredible 17 straight.

Wolfgang won his lone sprint car main event at Calistoga Speedway on October 19, 1986 driving the famous Weikert #29.  On that night he held off Steve Kinser, Bobby Davis Jr, Brad Doty and Jac Haudenschild.  “We are so excited to bring Doug Wolfgang back to Calistoga Speedway as our Grand Marshall for the Wine Country Classic,” said HMC Promotions President Tommy Hunt.  “I have seen Wolfgang do things a normal human being shouldn’t be able to do while driving a sprint car.  He is truly one of the all-time greats.”

A strong field of sprint car drivers is expected for the Wine Country Classic.  The two-all time winningest car owners at Calistoga Speedway, Clyde Lamar and Dennis Roth, will be represented by Chico’s Jonathan Allard and Kyle Hirst.  Allard has teamed up with Lamar and is now at the helm of the potent Tri-C Machine #3c.  Defending King of the West Champion Kyle Hirst is the hired driver for Roth Motorsports.  Lamar and Roth each have 13 wins as car owners at Calistoga.  Campbell’s Brent Kaeding has 21 career main event wins at Calistoga Speedway.  He is second on the all-time wins list and looks to put the famous #69 back in victory lane.  Rutherford’s Rico Abreu has three career wins at his home track.  Two of those wins have come aboard the Keith Kunz #67 USAC midget.  Abreu will be tough to beat piloting the Abreu Vineyards, Paul Silva prepared #24.  Campbell’s Bud Kaeding is a two-time winner at the speedway and is now driving the William Motorsports #0.  Other drivers expected to compete are Grass Valley’s Jason Statler, Roseville’s Sean Becker and Fresno’s Dominic Scelzi.

Advanced tickets for the Wine Country Classic can be purchased from HMC Promotions by calling (916) 773-7225.  Pit gate entrance for the competitors will open at 1 pm.  Front gate for this event opens at 4 pm.  Tickets and Will Call booth will be open at 1 pm.  Reserved grandstand tickets are $30.00.  General admission is $25.00.  Kids under the age of 4 are free.  Spectator parking at this event is $6.00.  A live band will play in the Music Pavilion from 1 pm until 5 pm.  For more information please visit the Wine Country Classic-King of The West Facebook page.