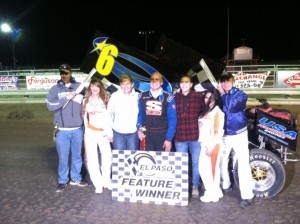 For the second time in as many outings the URSS Colorado region had another first time winner as John Jacobs took top honors Saturday night at El Paso Co. Speedway in Calhan, CO

After two attempts at running the first of three heat races that were called off due to short rain bursts, the third time was a charm, and the URSS Sprint cars gave the fans at the El Paso County Fairgrounds a show they will remember all summer long.

Seventeen of Colorado’s fastest sprint cars checked in for the night’s purse, which was bolstered by USA Performance Engines. Unfortunately Clint Shubert’s night was shortened with driveline woes and was unable to make the field.

Front row starters Dustin McNeill and Kevin Schramek led the sixteen car field to the green flag for the first of twenty five laps but lap one was waved off due to rookie McNeill spinning in turn four. On the restart, the 22t of Mike Taylor took to the lead for three laps but could not hold off the 16x of Scotty Cohran. “My car was just a little too loose tonight” said Taylor.

Cochran, who is new to the URSS this year, left the rest of the field behind as he set sail on the high side of the track and didn’t look back until the ninth circuit when the May 17th winner Coby Pearce spun in turn four.

Once again the green flag flew and Cohran’s MRE powered Fab- Tech ran away from the field and built a sizable lead, but a caution for the 86 of Zac Taylor who spun in turn one, erased Cochran’s lead on lap 20.

By the 21st circuit Mark Walinder, who started 11th, charged his way into the number two position behind Cohran and it looked to be a one-two finish for the Mighty Quinn Motorsports stable, but with three laps from the finish, Cochran spun collecting Walinder in turn two. “I think something broke – the car just snapped to the right – Mark had nowhere to go – I feel terrible.” said Cochran. Walinder stated” I feel bad for Scotty- he should have won this tonight. I don’t know what broke but it happened in the blink of an eye.”

The ensuing restart put the *6 of John Jacob on the pole where he held off the field until the checkered flag flew.” A very happy Jacob said” I finally calmed down and went slower to go faster and we started passing cars.” This is the first win in the URSS for the Action Signs & Graphics, USA Performance Engines, 4 Rivers Equipment sponsored *6 car.

Rookie Joey Schmidt (1s), Mike Hathaway in the Hooters 27a, Brian Harman in the 16, and the 15 of Nic Sutton rounded out the top five.

Other notables: Coby Pearce who took the green in the 16th spot finished a highly respectable sixth, while 14th starter Luke Lucero climbed to an eighth place finish and Mike Hathaway who started ninth advanced to the third position. Joey Schmidt was the night’s highest finishing rookie awarding him the Doyle Enterprises rookie award.

Please join us June 14th 2014 for the next URSS Colorado region race back at the El Paso County Fairgrounds!