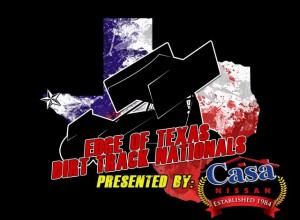 Based in El Paso, Texas since 1984, Casa Nissan services west Texas, southern New Mexico, and eastern Arizona with a lineup of new and used vehicles. Casa Nissan is located at 5855 Montana Ave. El Paso, Texas 79925. To see their full lineup of vehicles, log onto http://www.casanissan.com.

Along with the Lucas Oil ASCS presented by MAVTV, the Casa Nissan Edge of Texas Dirt Track Nationals will also feature a $500 to win X-Mods feature event.

The evening’s list of classes rounds out with the Casa Nissan Legends of the Southwest.

The Casa Nissan Edge of Texas Dirt Track Nationals will be the first of a two day stop in the borderland with the Southern New Mexico Speedway hosting the series on Saturday, November 8 with both nights getting underway at 7:45 P.M. (MT).

Admission each night is $20 with kids 10 years and younger admitted into the grandstands for free. All military ID will be admitted for $15 each night.

Tickets for the Casa Nissan Edge of Texas Dirt Track Nationals are on sale at http://www.ascsracing.com or at the gate the day of the race. Tickets for the Southwest New Mexico Speedway can be purchased by calling 575-524-7913.