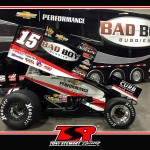 Indianapolis, IN — (February 10, 2015) — Following a World of Outlaws (WoO) Sprint Car Series championship that included a career-best victory count of 26, Donny Schatz is focused on the number one as he enters the 2015 season. The six-time and reigning WoO champion from Tony Stewart/Curb-Agajanian Racing (TSR) wants to earn Bad Boy Buggies® their first WoO title as primary sponsor of his iconic No. 15 sprint car. While the brand has won with Schatz as an associate partner, the 2015 season will mark their first season in a primary role on the No. 15 TSR entry.

TSR announced today a multi-year agreement with Bad Boy Buggies, a leader in off-road utility vehicles for hunting and outdoors, to become primary sponsor of its No. 15 team and Schatz, who will make his first laps in the Bad Boy Buggies car Feb. 10-15 during the 2015 DIRTcar Nationals at Volusia Speedway Park in Barberville, Florida.

“Tony Stewart Racing is celebrating its 15th season and the goal from the beginning has been to surround ourselves with good people in order to chase victories and win championships,” said Tony Stewart, team owner and three-time NASCAR Sprint Cup Series champion. “We work really hard to deliver on the racetrack, but we work just as hard to understand the business of each of our sponsors so we can help them accomplish their goals, be it in racing or with their customers. Donny Schatz and his guys that work on the car (Rick Warner, Steve Swenson and Eric Prutzman) are the best in the business, and partnering with Bad Boy Buggies is an extremely potent combination.”

Bad Boy Buggies, which is backed by the resources and capabilities of E-Z-GO and its parent company, Textron Inc., is a Fortune 500 manufacturer known worldwide for its powerful brands and products such as Cessna aircraft, Bell helicopters and Greenlee tools, and is also known for introducing models and innovations that have revolutionized the way outdoor enthusiasts use UTVs. Bad Boy Buggies will begin its third season with TSR and first as primary sponsor with Schatz, winner of 49 WoO A-Feature races in the previous two seasons piloting the 1,200-pound, 900-horsepower TSR No. 15 machine.

“Bad Boy Buggies is thrilled to continue our partnership with Tony Stewart Racing and to be aligned with Donny Schatz this season,” said Eric Bondy, Vice President, Consumer Business for Bad Boy Buggies. “Being the best is what our companies strive for and that’s the same commitment we see in Donny and TSR. They embody the performance and attitude of Bad Boy Buggies. We look forward to being along for the ride as Donny continues his historic run with the Outlaws driving the Bad Boy Buggies-sponsored machine at venues all across the United States and in Canada.”

The quest for the 2015 WoO title will reunite TSR with renowned car owners Mike Curb and Cary Agajanian. For the past five seasons, TSR has been joined by Curb-Agajanian Racing in its USAC Silver Crown and Sprint Car entries. This season that relationship will continue in the WoO as the team carries the historic Curb-Agajanian name as a co-entrant.

“The passion and drive to defend the World of Outlaws championship have us all extremely excited about being able to continue our relationship with Tony Stewart Racing,” said Curb, Chairman of Curb Records. “Having won four USAC Silver Crown championships with drivers Levi Jones and Bobby East and multiple USAC Sprint Car championships with Jones and Bryan Clauson, we’re excited to be chasing a World of Outlaws title with a driver in Donny Schatz and a team that has been remarkable for a number of seasons. We are honored to partner with Tony Stewart as he continues building on his tremendous legacy in short track racing.”

Schatz, the third-winningest driver in WoO history with 172 career A-Feature triumphs, enters his 19th year of competition with the Outlaws and eighth season as driver of the TSR No. 15 machine. The Fargo, North Dakota, resident is looking to earn his second consecutive WoO title and seventh overall. He will be behind the wheel of the TSR No. 15 Bad Boy Buggies J&J for more than 90 nights of action from February through November.

“We’re all looking forward to the 2015 season, and having Bad Boy Buggies and Chevrolet Performance being a part of our team this year is exciting for all of us at Tony Stewart Racing,” Schatz said. “We all know it takes a complete package to make this work. In the past couple of seasons, we’ve built an excellent relationship with Mr. Bondy and everyone with the Bad Boy Buggies brand, and we’re looking forward to that relationship growing in the future. We’ve got a great team. I can’t thank Tony Stewart enough for surrounding me with such great people and incredible partners. I’m really looking forward to being in Florida and getting the season started.”