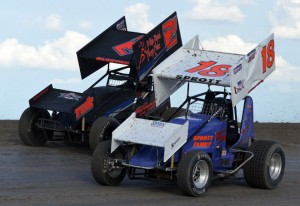 The United Rebels Sprint Series takes to the High Banks of Dodge City Raceway Park Saturday, May 9th for the first of four URSS Sanctioned events in the 2015 racing season. With only one race in the record books in the 2015 racing season thanks to Mother Nature, the Rebels are looking forward to returning to the track. Over the past nine seasons Dodge City Raceway Park has hosted some of the most competitive races in Series history with victories by both seasoned veterans and talented newcomers gracing Victory Circle at the famed 3/8’s mile oval.

Coming off of his first URSS event win 2014 URSS Kansas Region Rookie of the Year Jed Werner will look to make it two in a row. Ness City Kansas ace Lucas Cranston will be looking to keep building on his early season momentum after picking up his first win at DCRP earlier this season as will Ty Williams who won DCRP’s season opener. Other Kansas Region drivers including former National Champions Brian Herbert and CJ Johnson as well as URSS regulars Steven Richardson, Keefe Hemel, Zach Blurton, Jeremy Huish, Coby Pierce, Kade Hagans, Taylor Velasquez, Kaden Taylor and many more URSS favorites. The Colorado Region will be well represented with Zac Taylor, who won the season opener at DCRP last year. Also Kevin Schramek and several others will make the tow from Colorado.

Added into the mix will be the drivers from the DCRP Precise Sprint Series as all drivers will being earning Series points towards the 2015 DCRP Series Championship. Ray Seemann, Beau Ricke, Lance Davis, Tyler and Jordan Knight and many expected to make for an outstanding field of 305 Sprint Cars looking to pick up the win in the first URSS Sanctioned race of 2015 at DCRP.

Don’t forget to visit the URSS trailer to pick up a 10th Anniversary URSS Commemorative T-Shirt. As always you can visit the pits after the racing action to grab an autograph, picture or a T-Shirt from your favorite driver.

If you cannot attend Saturday nights race at Dodge City Raceway Park, you can always tune into the free live broadcast at www.racinboys.com to catch all of the action with Kyler Fetters calling the action starting at 7:30.