– BRANDON, S.D. (June 14, 2016) – Jack Dover returned to his usual form last weekend as he captured his first feature victory of the season and finished in the top two during all three main events.

The action began on Friday at U.S. 36 Raceway in Osborn, Mo., with the ASCS Warrior Region. Dover powered from third to win a heat race, which earned him a $500 bonus and a spot in the feature redraw. He pulled the No. 1 during the random redraw to start the main event on the pole. 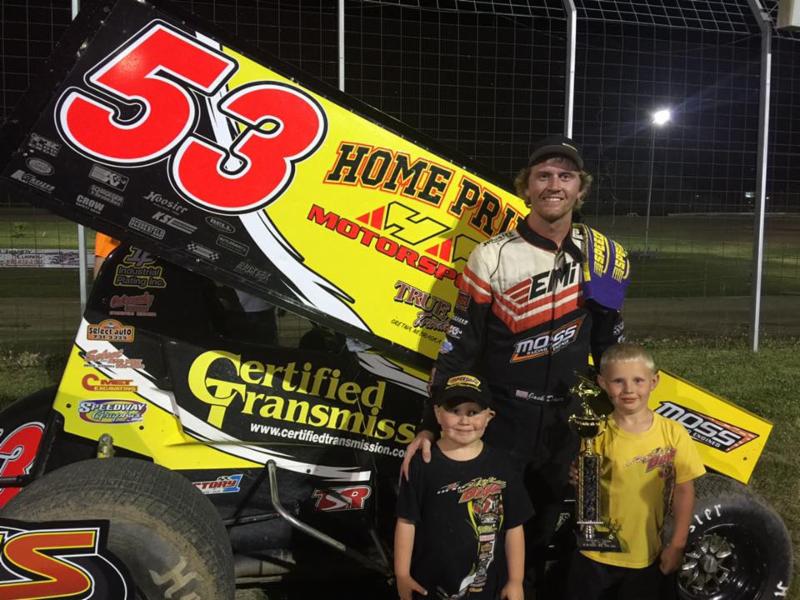 “The car was good so I think anywhere we started we could have moved forward, but starting first is always helpful,” he said. “It’s always been a good race for us. It was nice to get another win there and get our first win of the season. I know we’re better than where we were running to start the season. The last couple of weekends have been good and it helps the confidence.”

The win gives him a victory during six of the last seven years at the track.

Dover then ventured to Junction Motor Speedway in McCool Junction, Neb., on Saturday for a Carpetland Nebraska 360 Sprints event. He finished where he started – third – in a heat race before advancing from fourth to second place in the main event.

“It was follow the leader the whole night,” he said. “It was a rubber-down, one-lane track. A couple of guys made mistakes in front of me and I capitalized on it.”

The weekend wrapped up on Sunday at Badlands Motor Speedway, where Dover made his season debut by winning a heat race. He then advanced from fourth to third place in the feature, but was credited with a runner-up result when the winner was disqualified.

“The top five guys were under one blanket,” he said. “That’s how close the racing was. There were sliders and everything going on. It was close the entire race.”

Dover is set for another tripleheader this weekend when he will race on Friday at Salina Speedway in Salina, Kan., with the NCRA; Saturday at Off Road Speedway in Norfolk, Neb., with the Carpetland Nebraska 360 Sprints; and Sunday at Badlands Motor Speedway.

Friday at Salina Speedway in Salina, Kan., with the NCRA; Saturday at Off Road Speedway in Norfolk, Neb., with the Carpetland Nebraska 360 Sprints; and Sunday at Badlands Motor Speedway in Brandon, S.D.

Moss Racing Engines manufactures Ford racing engines. The company was started by Chris Moss, who worked under the Roush Yates Racing Engines banner before creating his own company in 2013.

“You can call Chris any time of the day or night and he’ll help you,” Dover said. “The engines are reliable. He hasn’t had any engine failures so that says a lot for his name and product.”