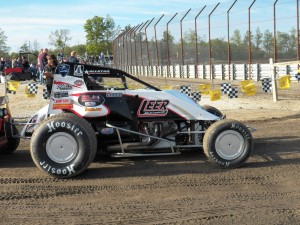 Haubstadt, IN – May 27, 2012. Jon Stanbrough of Brownsburg, IN, won the Memorial Weekend Classic at Tri-State Speedway Sunday night. The event was a King of Indiana Sprint Series event which was in addition sanctioned by the Midwest Sprint Car Series. The 30 lap feature paid $2,500 to win. Stanbrough was at the wheel of the Leer Motorsports DRC sprint car wrenched by Daryl Tate.

Stanbrough’s driving performance was a classic in itself. He started mid pack and methodically worked his way forward. Meanwhile a terrific race was being waged at the front of the field. Seth Parker led the first 22 laps and was fast off of an outside pole starting position. Second place was being hotly contested behind Parker with three drivers engaged in a close race. Stanbrough broke into that pack and got past Kyle Cummins to take second on lap 20. Three laps later he passed Parker for the lead. The win counted as Stanbrough’s 19th career MSCS feature victory.

Stanbrough’s drive from tenth to first earned him the Keizer Aluminum Wheels Hard Charger of the Race award. Fifteen drivers were on the lead lap at the finish. There were four caution periods during the feature. Three were for spins and the other yellow was issued when Chase Briscoe’s car stopped. Red flags were used twice during the evening. Donny Brackett’s car flipped during the third heat. Brian Karraker’s car flipped in the B.

The race program concluded with the UMP Open Wheel Modified feature. Kenny Schrader quickly turned one of his special dirt track appearances into a victory. He started on the pole with his Federated Auto Parts modified and drove to victory in the 25 lap feature. The NASCAR veteran proved once again that he has not lost that special touch that makes him so successful on the dirt. The feature paid $1,000 to win and drew 36 modified drivers!

Coverage provided as news and information for MSCS.