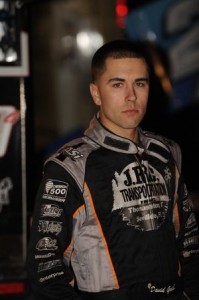 From DDR Motorsports PR
Watertown, CT — (May 1, 2013) — When it came to time trials at the famed Eldora Speedway during World of Outlaws STP Sprint Car Series events last year, no one had a better record than David Gravel. The native of Watertown, Conn., set fast time in each of his first three starts at the half-mile with the series, including sweeping time trials during the two-day spring event. Gravel will return to Eldora this weekend, looking to not only qualify up front, but score his first win of the season.

The first of three visits to Eldora Speedway in Rossburg, Ohio, for the World of Outlaws STP Sprint Car Series is set for Friday, May 3 and Saturday, May 4. Gravel will pilot the No. 6 Firetext Response Maxim for Bill Rose Racing in each of those contests.

“One of the keys at Eldora is to keep the car really straight,” said Gravel. “You have to be confident to run the cushion and that’s where you need to be to run good. I feel pretty comfortable in Bill’s car and have a good feel for it, so hopefully that translates to this weekend at Eldora.”

Gravel made four starts at Eldora in 2012, all with the World of Outlaws STP Sprint Car Series aboard his familiar No. 89G. In the first night of the spring event at the half-mile last season, he bested a solid 33-car field in time trials. He was battling for the lead in the A-Feature that night when contact with another car led to a violent flip that ended his night.

The 20-year-old rebounded the next night with a strong fourth-place finish. After setting fast time for the second straight night, he lined up fourth in the first eight-lap heat race and finished third to earn a spot in the dash. Gravel both started and finished sixth in the dash, which put him on the outside of the third row for the 30-lap A-Feature.

Gravel continued his qualifying dominance at Eldora during the Knight Before the Kings Royal, again turning the fastest lap. He would come home 12th in the 30-lap main event later that evening. The next night during the Kings Royal, he just missed qualifying for the heat race inversion by one spot. The East Coast racer finished fifth in the first heat race, with only the top-three transferring to the main event, thus relegating him to the B-main, where would come home sixth, again coming up two positions shy of transferring to the 40-lap Kings Royal.

“Racing at Eldora in the spring, you always have the weather to contend with,” noted Gravel. “There will probably be a lot of cars there as well this weekend. There are a lot of variables, so you just have to adapt with what’s given to you and go from there. We seem to do pretty well when different situations and circumstances pop up, so we should be all right.”

“We had a really good car at Salina last week, even though we had trouble with the rear end,” he explained. “That gives us a good baseline going to Eldora, knowing we have a good set-up for a high-banked, high speed track. I feel pretty good headed over there and always have fun racing at Eldora. Getting qualified well and making the (heat race) inversion is our first goal each night. If we can finish in the top-10 both nights at Eldora, it will be a good weekend for us.”