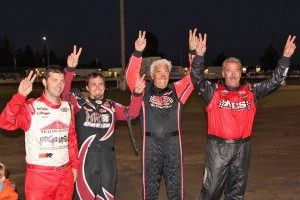 The cool coastal climate of Watsonville, California will welcome the King of the West 410 Sprint Car Series to the Ocean Speedway for the only time in the 2013 season this Saturday night July 13. The much anticipated night of racing will also mark the third annual “Howard Kaeding Classic” and is the 11th round of action for the KWS 410’s.

Howard Kaeding was a multiple-time California state super-modified champion, a four-time Johnny Key Classic winner and once captured a record 17-straight races at the San Jose Speedway. The driver known as the “Campbell Comet” claimed over 300 main event victories in his career and even raced into his 60’s, before retiring in the 1990’s. The “HK Classic” has been a great weekend of re-living memories from the past and will certainly be so once again in 2013.

To commemorate the event, fans and teams are invited to attend the “HK Classic” luncheon held at the fairgrounds on Saturday afternoon July 13 from 2pm to 6pm, which will benefit the NARC Benevolent Fund. The luncheon is being backed by High Five Pizza & Catering Co. along with Roth Motorsports and will feature a terrific New York Steak & Chicken lunch for a $20 donation. There will also be a raffle and silent auction.

All proceeds from the “HK Classic” Luncheon will go directly to the NARC Benevolent Fund, so we invite everyone to come support a great cause on Saturday and do some bench racing with many of your favorite drivers and closest race fans.

Fresh off his second King of the West 410 victory of the year current point leader Kyle Hirst will lead the series into the “Howard Kaeding Classic” on Saturday night. The Sacramento driver set fast time and then led the final three-laps of the feature last weekend in Fernley to help extend his point lead to 28-markers over his brother-in-law Willie Croft. The wheel-man of the Roth Enterprises No. 83jr will be gunning for his first ever 410 Sprint Car Ocean Speedway win this Saturday evening.

The battle for second in the King of the West 410 Sprint Car Series standings continues to be a close one between Croft and three-time series champion Jonathan Allard. Going into the “HK Classic” just seven-points separate the talented duo. Croft charged to a runner up finish last weekend in Fernley to earn his seventh top-five effort of 2013 in the Tri-C Machine Sprinter. Allard claimed last season’s “HK Classic” after a thrilling battle with Shane Golobic and Tommy Tarlton in the main event.

Fresno’s Craig Stidham comes into the weekend ranking fourth in the King of the West 410 standings and is fresh off a top-five finish last Saturday in Fernley. The former “Trophy Cup” winner continues to knock on the door of his first series win of the year and he’ll look to accomplish that this weekend. Sydney, Australia’s Peter Murphy has moved to a season high fifth in the standings and has been one of the hotter drivers in recent weeks. Murphy will be searching to find victory lane on Saturday.

Completing the top-10 in the King of the West 410 Sprint Car Series standings going into the “HK Classic” are 2004 series champion Jason Statler, 13-time champion Brent Kaeding, St. Helena’s Rico Abreu, Auburn’s Richard Brace Jr. and Oakhurst’s Doug Gandy. Brace Jr. is coming off his best ever KWS finish last Saturday in Fernley, where he ran third behind Kyle Hirst and Willie Croft after leading much of the main event.

The program will start a little earlier than usual this Saturday July 13 with the front gate opening at 3:30pm and qualifying scheduled to fire off around 5pm. The pit gate for competitors will open at noon.

Adult tickets on Saturday will cost $25, seniors will be $24 and kids six to 12 will be $15. All seating will be general admission.

The Ocean Speedway is semi-banked quarter mile clay oval with the King of the West 410 Sprint Car Series track record being 11.345, which was set by Scotts Valley’s Evan Suggs on August 5, 2011. The all-time track record was set by Mark Kinser in 2000 with a blistering 10.949.

The “Howard Kaeding Classic” began in 2011 and featured a two-night KWS show that season, with the opener seeing Easton’s Tommy Tarlton make a lap 22 pass of Tim Kaeding to score the victory. T. Kaeding came home in second and Chico’s Jonathan Allard crossed the line in third to round out the podium. Completing the top-five were Bobby McMahan and Brad Furr.

Last season Chico’s Jonathan Allard captured the “HK Classic” to mark his first ever KWS 410 win at Ocean Speedway. The entertaining main event saw Allard win out during what was a three-car fight for the lead over much of the race with Tommy Tarlton and Shane Golobic. Kyle Hirst and Peter Murphy rounded out the top-five.

Top-15 in driver standings after 10 rounds of competition:

Winners so far this season with the King of the West 410 Sprint Car Series:

Upcoming King of the West events:

The King of the West 410 Sprint Series will get ready for its second event of the season at John & Donna Soares’ Antioch Speedway on Saturday July 20. The night of competition will also be the final visit of the year to the one-third mile clay oval that always provides thrilling moments. The KWS Winged Warriors kicked off the season at Antioch on April 20 with Willie Croft coming out on top over Rico Abreu & Kyle Hirst.

On Saturday July 27 the King of the West 410 Sprint Car Series will make its return to the popular Santa Maria Speedway for the first time in two years. With its coastal climate the track is always a favorite stop among teams and fans alike, especially during the heat of summer. In 2011 the King of the West Series competed at the Santa Maria Speedway on two occasions, with the first being captured by Andy Gregg and the second won by Jonathan Allard. The victory for Gregg marked his first career Golden State/ King of the West 410 triumph.

On Saturday August 3 the King of the West 410 Sprint Car Series will make its anticipated debut at the brand new Stockton 99 Dirt Track. After a very successful World of Outlaws event, everyone is eager to see Winged 410 Sprint Cars return to the venue on August 3. The Stockton 99 Dirt Track is located on the San Joaquin County Fairgrounds in Stockton, California and is built inside a one-mile horse track. The grandstands are some of the nicest we will see all season long with KWS & makes a unique experience for Sprint Car racing.See more