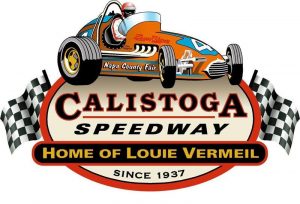 Roseville, CA — (August 21, 2013)– The biggest race weekend of the year just got a little more lucrative.  The 6th Annual Louie Vermeil Classic at the Calistoga Speedway received another financial boost for the Amsoil USAC/CRA and Western Classic Sprint Cars Series purse.  The Saturday night main event winner will now receive a $7,500 payday while the Sunday night winner will win a record $10,000.  Never before in the history of the speedway has a non-wing sprint car winner received such a handsome check for one night of work.  “It has been incredible the outpouring of financial support we have been receiving for this weekend,” said Calistoga Operations Manager Tommy Hunt.

The 6th Annual Louie Vermeil Classic will take place starting Saturday night, August 31, and Sunday night, September 1.  The traditional racing format will feature both non-wing sprint cars and midgets with entrants from all over the United States.  The Saturday and Sunday night Honda Western Midget main event winner will earn a $10,000 winner’s check.  “We could not be happier with the magnitude that this race continues to achieve,” said Hunt.  “We are very proud to host such a wonderful event that pays tribute to the great Louie Vermeil while showcasing some of the most talented dirt track racers in the World.”

While the racing takes center stage during the night time, the Louie Vermeil Classic will once again host the 6th Annual Wine Pouring event on Saturday afternoon starting at 1 pm and closing at 5 pm.  At least 15 wineries will be represented and for $10 fans will have the opportunity to sample the wines and take home a commemorative wine glass.  On Sunday it is the beer makers chance to showcase their beverages.  From 1 pm to 5 pm fans can cruise the beer garden for samples of drinks.  Sunday is also a $10 cost and includes a commemorative glass.  During both days the Speedway will host an autograph session featuring Calistoga Speedway Hall of Fame Inductees.  There will also be vintage race cars on display, live music and plenty of good times.