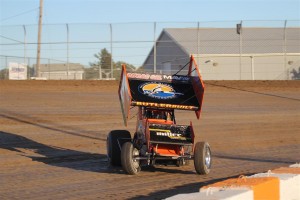 September 16, 2013 – It was about the experience last weekend for Brad Loyet and the Vacuworx Global/Miller Truck Lines #o5 team.  With some time off the Lucas Oil ASCS National Series, the team headed to the Ohsweken Speedway in Ontario, Canada for the Canadian Sprint Car Nationals.  Not only did they come away with the experience, they finished eighth in the finale.  This week, they’ll be quite a ways south of Ontario at the Texas Motor Speedway in the Metroplex as the ASCS tour gets back in action.

Friday served as a warm-up for Saturday’s Canadian Nationals.  “If you won one of the Twin 15’s on Friday, you were in the feature on Saturday,” says Brad.  “I started ninth in my heat race and we finished sixth.  They only took five cars to one of the features, so we were done for the night.  Luckily, Saturday was a new night.”

The Sunset Hills, Missouri driver found some new rubber for Saturday’s finale.  “We were using our ASCS medium right rear on Friday,” says Brad.  “It was legal, but most of the other cars were running a softer and wider tire.  We put one of those on and it helped us quite a bit.”

The format was a little different than any other.  “We drew a pill to start in a heat race, and then you qualified with your heat,” says Brad.  “We qualified second in our group and seventh overall.  They inverted four in the heat race, so we started third and finished second.”

That put Brad outside of row six for the finale.  “The track the second night was in really good shape around the bottom,” he says.  “Everyone was pretty much down there waiting for the guy in front of them to mess up.”

He would finish the race eighth.  “I felt like we had a better car than eighth, but it was tough to go anywhere,” says Brad.  “The top came in a little the last five laps, but by then, everyone was pretty much in their position.”

Mostly, it was about the experience.  Other than winner Shane Stewart, Wayne Johnson, Brooke Tatnell and a few others, Brad was in unfamiliar territory with most of his competitors.  “Overall, it was an awesome experience,” he says.  “It was cool to go to Canada and race.  We came away with an eighth place finish, so we were pretty happy overall.”

Brad feels better prepared for TMS than a year ago.  “It’s unfortunate we have to go all that way for one night,” he says.  “We struggled quite a bit at TMS last year.  It was a deal where we were trying some things because it wasn’t a point race, and it didn’t work too well.  I think we’ve found some things that will be good down there, so I’m looking forward to it.”

If you’d like to be added to Brad’s e-mail list for weekly releases, e-mail sprntcar@hotmail.com with “Loyet” in the Subject Line.